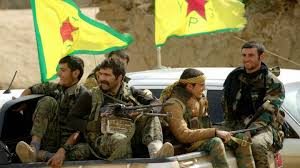 A feared Turkish invasion of Syrian Kurdistan (Rojava) in northeast Syria could spark a resurgence of the Islamic State group, analysts and Kurdish forces have warned, despite Ankara’s pledge to prevent the jihadists’ return, like reported by ekurd.net.

Ankara has threatened an offensive in Syria against Kurdish militias and US forces on Monday pulled back from Turkish border areas, opening the way for an invasion President Recep Tayyip Erdogan has said could come at any moment.

An open assault would reverse years of successful Kurdish-led operations to defeat IS and allow some of its surviving leaders to come out of hiding, said the Syrian Democratic Forces (SDF), the Kurdish militia that controls much of northeastern Syria.

With little other leverage left in the regional game, Sam Heller of the International Crisis Group think tank, told AFP the SDF has an “interest” in warning of an IS threat if open conflict breaks out with rival Turkey.

“But the fact is that ISIS is still a threat, one that seems likely to metastasise if the SDF is forced to divert attention and resources… to a defensive battle against Turkey,” he said, using another acronym for IS.

While a Kurdish-led operation earlier this year saw the death of IS’s territorial caliphate, the organisation isn’t dead and sleeper cells have been active in SDF-held areas and in Syria’s vast desert where they continue to hit regime forces with deadly attacks and ambushes.

Charles Lister, director of the US-based Middle East Institute, said US President Donald Trump was “granting IS the gift of rebirth”.

The US military itself has warned that, short of sustained international pressure, IS would soon have the ability to regroup.

“The battle against IS is not over,” Abdulkarim Omar, the top Kurdish foreign affairs official, told AFP Monday.

“There are hundreds of sleeper cells in recently liberated areas,” he said.

The SDF, with backing from the US-led coalition, has scored major victories against IS near the Turkish border in the Kurdish Kobani and in the jihadists’ former Syria capital of Raqqa.

This year, they declared the territorial defeat of the group after seizing Baghouz, the final IS bastion in eastern Syria.

The SDF is now concerned that jihadists could replenish their ranks by freeing thousands of fighters and their families who are being held in detention centres and informal settlements in Syria’s northeast.

The Kurds consistently warned that they would be unable to guard IS fighters if their forces were busy fighting off a Turkish offensive.

On Monday, Omar said that detention centres are not heavily fortified.

“They are only buildings… in the event of any security vacuum, these criminals could have an opportunity to break free,” he said.

The official also said he was concerned about displacement camps, namely Al-Hol, the largest of the settlements, which he described as a “time bomb”.

Security incidents have been on the rise in the crowded camp, which houses more than 3,000 IS families among its more than 70,000 residents, according to the Kurdish administration in northeast Syria.

The thousands of foreign IS brides held in Al-Hol, are “as dangerous as the thousands of IS fighters being held in SDF detention centres”, it said this week, noting daily stabbings, killings and attempts to break free.

IS chief Abu Bakr al-Baghdadi has urged followers to free detained jihadists and family members held at camps in Iraq and Syria, vowing “revenge” in an audio recording released on September 16.

SDF spokesman Mustefa Bali last month said IS militants “have stepped up their regrouping efforts through women in the camp recently”.

The Institute for the Study of War last week said IS is bribing prison guards and raising funds to smuggle women out of camps, including Al-Hol.

“ISIS is likely preparing more coordinated and sophisticated operations to free its detained members,” it said in a report citing incidents in which prisoners and IS brides managed to break free.

Turkey, however, assured Monday that it “would not allow IS to return in any shape and form”.

But analysts argue that Ankara could unintentionally help boost jihadists.

“Turkey will not intentionally target camps and prisons but it could inadvertently strike them in the process of intervention,” Syria expert Samuel Ramani told AFP.

Heller also said a direct Turkish attack on camps and prisons was unlikely.

“What seems more likely is that these facilities, which are already vulnerable to riots and attempted jailbreaks, will be left vulnerable as the SDF redeploys the forces securing them to fight Turkey,” he said.

“If ISIS cadres escape in the ensuing chaos, they could catalyse ISIS operations locally. Or, if they flee the Syrian battlefield, they could augment militant groups internationally.”

The Kurdish PYD and its powerful military wing YPG/YPJ, considered the most effective fighting force against IS in Syria and U.S. has provided them with arms. The YPG, which is the backbone of the SDF forces, has seized swathes of Syria from Islamic State.

Syria’s Kurds have established a semi-autonomous region in northeastern Syria during the country’s eight-year war.

In 2013, the Syrian Kurdish Democratic Union Party PYD — the political branch of the Kurdish People’s Protection Units (YPG) — has established three autonomous Cantons of Jazeera, Kobani and Afrin and a Kurdish government across Syrian Kurdistan in 2013. On March 17, 2016, Kurdish and Arab authorities announced the creation of a “federal region” made up of those semi-autonomous regions in Syrian Kurdistan.