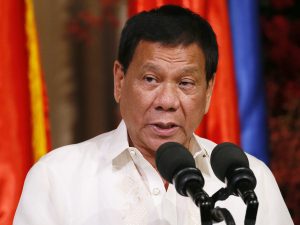 As India prepares to receive 10 ASEAN leaders for the Republic Day celebrations, an intelligence alert that the President of the Philippines, Rodrigo Duterte, is on the radar of the Islamic State is giving security agencies sleepless nights, like reported by theprint.in.

According to sources, Duterte’s agenda to militarily wipe out Islamist extremism from the state of Mindanao—along with killing Isnilon Hapilon, leader of Abu Sayyaf and emir of the IS in Southeast Asia in the city of Marawi—has provoked the group to mobilise sleeper cells based in Indonesia, which are now planning a strike.

“Duterte is coming with baggage, as he has been very vocal about wiping out IS. The Indonesian President too will be present, and could also be a target. We have intelligence inputs that the IS has mobilised its people and is planning to strike,” a security agency source told ThePrint.

Generally there is just one visiting dignitary at the Republic Day parade, but this time, with 10 of them expected, Rajpath is more vulnerable than usual to sabotage.

“The space for the enclosures remains the same, while the turnout of dignitaries and people is higher. Therefore, the chances of infiltration are higher,” an official of a security agency who wished to remain anonymous said.

“Since the inputs from intelligence agencies are very specific, we are exercising extra caution and have made a separate unit to check the antecedents of persons, including government officials on duty, entering the enclosures.”

Duterte’s history with the IS

Abu Sayyaf is a faction that aims to create an Islamic Caliphate in the Philippines, and is allegedly involved in several kidnappings and beheading hostages, including foreigners.

The Philippines has been facing an insurgency problem since the late 1970s, with the state of Mindanao, inhabited by minority Muslims, demanding autonomy.

The demand for a Muslim Mindanao was followed by many armed rebellions, and was being spearheaded by Hapilon, who had pledged loyalty to IS leader Abu Bakr al-Baghdadi after he declared a caliphate in Mosul, Iraq, in 2014. Duterte’s military eliminated Hapilon and sanitised his followers.

Moreover, martial law was extended in Mindanao for one more year, until the end of 2018.

Duterte, who vocally condemns the IS, has also vowed that he will never allow IS to make the Philippines its base in Southeast Asia, and that he will not let the ones who subscribe to the Daesh or IS ideology succeed in making the Philippines their regional centre. He has said that through martial law, he aims to eradicate terror groups and communist rebel groups in Mindanao.

Intelligence agencies have inputs that the terror groups, especially the Jaish-e-Mohammad, might use a new-age improvised explosive device (IED), which has been made in China.

“This circuit is very difficult to detect by standard explosive detectors. It’s reported that China has exported a bulk of these circuits to Pakistan, ostensibly for road construction in the China Pakistan Economic Corridor,” a source said.

“Since heads of state from 10 countries will be present at one place, terror groups will see this as a chance to strike and send out a message. Hence the threat perception is high”.