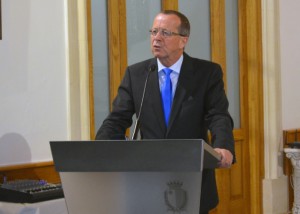 The rise of the Islamic State in Libya is expanding “day by day” and the urgency of the situation demanded that the new national unity government sets foot in Tripoli immediately so there be an immediate transfer of power, the United Nations’ special delegate to Libya Martin Kobler said.

Addressing a joint press conference with foreign affairs minister George Vella at the ministry in Valletta, Kobler warned that the ongoing talks for a political solution in Libya were progressing at a “snail’s pace” and that the consequent political vacuum in the country benefitted no one but the Islamic State.

He explained that the progress on the formation on the new government in Tripoli had met a brick wall as it still lacks the authorisation of the House of Representatives in Tobruk.

Libya has become deeply fractured since two rival governments were formed in the summer of 2014: the internationally recognised authorities based in Tobruk and a rebel-backed authority holding power in the capital, Tripoli.

The unity government, which was announced on January 19 under a United Nations-backed plan is aimed to bridge a political divide and deliver stability by tackling a growing threat from Islamic State fighters, is yet to be established after it was rejected by the Tobruk-based parliament and because it does not enjoy the support of the majority of MPs in the two elected parliaments.

Comparing the government to a “truck with no licence plate”, Kobler said the situation is in a stalemate and that the government must set set up in Tripoli immediately to organise a peaceful transfer of power, even without being endorsed by the House of Representatives.

“Can the truck drive without a licence plate? Yes it can. Due to the urgency of the situation and the humanitarian crisis, it is justifiable that the government moves into Tripoli immediately once the security is established,” he said.

Warning that the expansion of the Islamic State is “progressing day by day”, Kobler insisted that the Libyans themselves must fight to regain their country, and that consequently, any foreign intervention will be ruled out unless requested by the Libyans.

Earlier this week, the United Nations warned that IS – or Daesh, an adopted acronym of their Arabic name which the Islamic militants hate – was expanding its control over Libya.

Asked whether the UN-brokered plan still envisages the disarmament of militias, Kobler explained that even though Libya requires a collected effort against the Islamic State, militias would be demobilised, disarmed and reintegrated.

Some 1,500 armed factions, including ISIS, are deployed across divided Libya, gripped by chaos and insecurity since the 2011 uprising that toppled long-time dictator Muammar Gaddafi.

Kobler also explained that there was a dire humanitarian situation in Libya as thousands of people were displaced, while there were significant shortages of food and medicine. Similarly, he said Libya’s crisis devastated the country’s economy as oil production now stood at 350,000 barrels a day, down from 1.6 million barrels before the 2011 Libyan uprising.

Kobler also said that 95% of the Libyan population is in favour of a united government.

On his part, foreign affairs minister George Vella said the “urgent” situation in Libya had almost reached “the point of no return” and had complicated itself as a result of the political vacuum and the rise of the Islamic State.

In comments to MaltaToday, the minister argued that if the militants were to take control of swaths of territory in Libya, the results could be devastating.

Vella insisted that it is “urgent” that some government take control of Libya to stem the threat by the Islamic State, and to achieve some form of security and stability in the country. The minister explained that the situation in Libya remained very high on the government’s political agenda due to the humanitarian crisis and security concerns that might result.

“Malta is behind the UN’s initiative and effort to restore stability in Libya. The most important aspect is the urgency of the matter,” he continued.

Vella will tomorrow attend talks with EU foreign ministers that will be addressed by the head of the United States mission in Libya Martin Kobler.