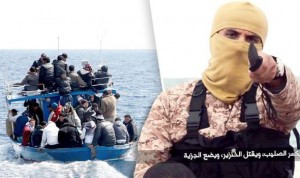 The House Homeland Security Committee is warning that the Islamic State threat is growing in Europe, outpacing law enforcement’s efforts there to contain it.

The House committee’s European Terror Threat Snapshot cited 22 detected plots and/or actual attacks in the past 12 months — about two every month — up from 13 in the 15 months before that.

With hundreds of thousands of refugees flooding in from Syria, it will be even more difficult to detect future plots.

The report called the threat to Europe “unprecedented” and warned it is overwhelming security forces there.

“A Belgian counterterrorism official warned only days before the March 22 attacks in Brussels, ‘…we don’t have the infrastructure to properly investigate or monitor hundreds of individuals suspected of terror links, as well as pursue the hundreds of open files and investigations we have. … It’s literally an impossible situation and, honestly, it’s very grave,’ ” according to the report.

“I think the big takeaway is that the jihadist threat in Europe is serious. It’s very complex and multifaceted,” said Scott Stewart, vice president of tactical analysis with Stratfor, a private intelligence firm.

“It’s difficult to put one of these puzzles together when you have so many potential suspects,” Stewart said.

In Germany alone, the domestic intelligence service identified 300 instances of radical Islamists recruiting within the refugee population, the report states.

The report says that Europe’s porous borders give IS an opportunity to slip in fighters unnoticed.

“The operatives behind the Paris and Brussels attack plots reportedly operated across at least nine EU countries — France, Belgium, Germany, the U.K., Greece, Austria, Italy, the Netherlands, and Hungary,” the report states.

“At least one of the March 2016 Brussels attackers reportedly posed as a Syrian refugee in Greece. The head of Germany’s domestic intelligence agency warned this year ‘we have repeatedly seen that terrorists … have slipped in camouflaged or disguised as refugees’,” the report states.

Stewart noted the attackers in Paris and Brussels were mostly French nationals.

“These were people who were born and raised in these countries,” he said. “The silver lining is that a lot of these guys were on the No Fly List, which would keep them from getting on a plane to the U.S.”