You are here: Home / MidEastGulf / Islamic State: The devastating aftermath of IS attacks in Yemeni capital Sana’a 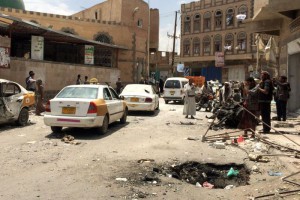 As the death toll rises from the twin bombings, overnight Saudi-led coalition warplanes again targeted Houthi rebels as part of their campaign to restore the government of president Hadi, now exiled in Ryadh.

In the IS attack on the Al Muayad mosque in the north of the Yemeni capital, the death toll has reached 34, with another 94 people injured, many seriously.

The area is a stronghold of the Al Houthi Shiite militia, who control the capital.

As the dead and wounded were being taken away, the relentless Saudi-led air raids resumed drawing anti-aircraft fire from Al Houthi government forces.

The Shiite group is backed by Iran.

Yesterday’s attack on the mosque — full of people during prayer time — underscores the difficulties facing the security forces.

A suicide bomber detonated his device inside the mosque and a car bomb exploded outside minutes later, as medics arrived.

“It was about 6:25pm and I was in my own apartment near the Mosque. I was shocked by the sound of the blast and I thought it was an air raid,” Fuad Saleh, a 38-year-old resident of the neighbourhood, told me.

“[Then] I heard the second much bigger explosion and I was hearing crying and appealing voices and could not dare to get out of my room.

“I was very scared and did not know what was actually going on.”

Using its Twitter account, IS claimed responsibility for the attacks, describing them as a “revenge operation [on] Shiite Houthis”.

Today at the scene, I saw twisted remains of tangled steel from the bombed car, and inside the mosque thickened blood was mixed with the debris from shattered timber and glass windows.

Black smoke from the car bomb had stained the exterior of buildings.

Later, I visited the cemetery where many of the victims were being buried.

I met some of their families, sadness etched across their faces, as they were comforted by others.

A health ministry spokesman told me: “We have taken victims to six private and public hospitals in the city, but there is a serious problem beyond our abilities in dealing with such major incidents.

“There is a severe shortage in medicines, medical equipment and cadre. No fuel for hospitals’ emergency power generators and all hospitals and the ministry have issued appealing calls to national and internal actors.

“The blockade on Yemeni air, sea and land by the Saudi-led coalition is behind all these problems, Yemen cannot import goods, fuels nor medicines.”

The ultimate motives of IS in Yemen remain unclear and its operations, so far, limited to the capital Sana’a.

Any attempts by IS to expand are certain to be blocked by AQAP, Al Qaeda’s Yemen-based affiliate.

Everyone I spoke to in Sana’a has been shocked by the scale of IS violence.