You are here: Home / West Asia / Islamic State terrorists have moved into Indonesia from the Philippines and Syria 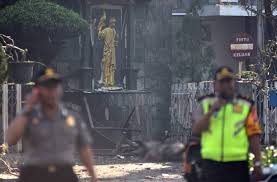 The order to move operations from the Philippines came from Kabul, where militants fleeing Syria have taken refuge. The Armed Forces are on alert across the country. Suspected terrorists are being arrested. President Widodo revives a joint special ops military force. Indonesians approve, but Islamists and human rights organisations express fears, like reported by asianews.it.

“The attacks of the last few days show that the Islamic State (IS) has moved its operations from Marawi, in the Philippines, to Indonesia,” said Indonesian Defence Minister General Ryamizard Ryacudu.

The former commander in chief of the Indonesian Armed Forces said he had received the information from ‘Our Eyes’, an intelligence sharing agreement involving six countries of the Association of South-East Asia Nations (ASEAN).

“The latest series of attacks in Surabaya follow a direct order from Kabul to move the bases from Marawi to the country,” Ryacudu said at a press conference three days ago.

The minister explained that, because of the massive campaigns by the United States, Russia and their allies, a large number of IS fighters fled from Syria to Afghanistan.

For their part, Indonesia’s Armed Forces are on alert all over the country and suspected terrorists continue to be arrested.

The force is called Koopssusgab (Komando Operasi Khusus Gabungan) and will be led by Hadi Tjahjanto, commander of the Indonesian Armed Forces (TNI).

Earlier, National Police spokesman Setyo Wasito confirmed that Army’s Special Forces (Kopassus) had been involved in recent raids, including the capture of suspected terrorists, along with Densus 88, the special anti-terrorist police department.

Some Islamist politicians and various human rights organisations have expressed their opposition to the involvement of the Armed Forces in police actions. They cite concerns about possible human rights violations.

Under the authoritarian rule of President Suharto (1967-1988), Indonesia’s Armed Forced were repeatedly accused of mistreating members of separatist movements, opposition groups and critics of the Suharto administration.

However, despite the criticism of conservative politicians, the Armed Forces’ involvement has been welcomed by many Indonesians, frightened by the new wave of terror that has hit the country.