You are here: Home / Senza categoria / ‘Islamic State’ terror group plotting to use drones for nuclear attack on West

Isis terrorists are planning to use drones to spray nuclear material over Western cities in a horrific “dirty bomb” attack, David Cameron has warned. 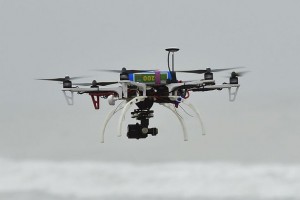 World leaders are concerned that  jihadists want to buy basic drones that are widely available online to transport radioactive material into the heart of major cities in a strike that could kill thousands.

The UK Prime Minister warned that the dangers of the so-called ‘Islamic State’ terror group getting hold of nuclear material was “only too real”. Mr Cameron on Friday met world leaders, including the presidents of America, France and China, to plan how they would react to such an attack.

Footage has reportedly emerged showing Isil using drones and the threat was deemed so serious that – in a highly unusual move – world leaders were asked to take part in war games to plan how they would respond.

One scenario, mapped out by US officials and presented at the special Nuclear Security Summit session in Washington DC, spelt out the danger in remarkable detail.

It imagined radioactive material had been taken from a medical facility by “insiders” and sold to extremists through the internet’s secretive “dark web”.

Cameron outlined how ministers would urgently hold a Cobra meeting and deploy counter-terrorism police and the UK Border Force. A British official said: “We have already seen Daesh [another name for Isil] trying to look at whether they can they get their hands on low-level crop-using-type drones.”

Isis is believed to have seized around 90 pounds of low grade uranium from Mosul University in Iraq after taking over the city in 2014, though its limited toxicity means its use would likely cause panic than serious harm.

In Europe, fears have also been raised by apparent attempts to infiltrate nuclear facilities. Cameron told journalists in Washington DC that concerns over a radioactive attack were real.

“So many summits are about dealing with things that have already gone wrong,” he said. “This is a summit about something we are trying to prevent.

“The issue of nuclear security and the security of nuclear materials, particularly when it comes to the problems of international terrorism, the concept of terrorists and nuclear materials coming together – which is obviously a very chilling prospect. And something in the light of the Belgian attacks, we know is a threat that is only too real.

“That’s the point of being here and that action Britain has taken with America, very much giving a lead on nuclear security, and the security of nuclear sites, transport and materials.”

During the nuclear summit it emerged that US commandos have been trained to seize and disable radioactive bombs.

Cameron announced during his visit that Britain would hire 1,000 more armed police and deploy counter-terrorism units in cities outside London to help counter any future attack.

Michael Fallon, the UK Defence Secretary, also announced yesterday that over £40 million will be spent on a new Cyber Security Operations Centre.

The facility will be dedicated to using “state-of-the-art defensive cyber capabilities” to protect Britain from “malicious actors”, according to government officials.

Mr Fallon said: “Britain is a world leader in cyber security but with growing threats this new Operations Centre will ensure that our Armed Forces continue to operate securely.”