You are here: Home / Analysis / Islamic State terror by air

The ‘junior varsity’ experiments with expanded and deadly drone warfare 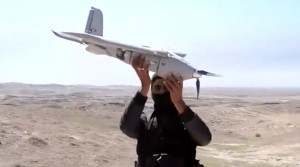 The Islamic State — or ISIS, or ISIL, as some people call it — is the most painful of the headaches Barack Obama bequeathed to the new president. He called it “the junior varsity,” as if it were a mere annoyance beneath his concern, but it is proving to be not so junior and an accomplished varsity. Now the junior varsity is experimenting with drones capable of delivering small bombs, like reported by washingtontimes.com .

These are commercially available drones, manufactured in China and available on Amazon. A man could order one to be delivered by FedEx or UPS to an address in Chicago or Los Angeles, and with an added improvised explosive device, like the IED employed to kill innocents on roadsides in the Middle East, it would soon be on the way to an American city.

The Middle East Media Research Institute, which monitors threats of violence in the region, captured footage from an Islamic State internet channel showing a demonstration of the first drone believed capable of delivering such a small bomb. “If so,” reports Rowan Scarborough in The Washington Times, “it further complicates the counterterrorism mission of protecting the public against the Islamic State’s ongoing campaign to attack civilian targets in the Middle East, Europe, the United States and elsewhere.”

Steven Stalinsky, the director of the research institute, predicts the use of evermore deadly drones will grow. “They have been using drones for a few years, mainly for their [propaganda] films, but there has been a major increase in usage. All jihadi groups are using drones and studying how they work and how to avoid them. They are easily obtainable online, then can be modified. We have seen many drones used by ISIS that can be bought on Amazon.”

The U.S. Army is testing more than 20 government and industry systems “designed to detect, identify and electronically defeat enemy drones,” Erik K. Fanning, the retiring secretary of the Army, told the inquiring Rep. Duncan Hunter, a member of the House Armed Services Committee, two days before the end of the Obama administration. “These advances present our adversaries with opportunities to quickly adjust and improve their tactics, and the Army must remain adaptive and agile to respond to the evolving threat.”

The ISIS propaganda footage is chilling, demonstrating the determination of an enemy that the previous administration insisted could be disarmed with a little understanding and kindly forbearance. Young terrorists are shown having gathered to select the next suicide bomber to be chosen from among them by random drawing. The others congratulate the “winner.” More cheers as he mounts the truck to take an improvised bomb to the target. A surveillance drone follows the truck through the streets of Mosul until it finds the target, and explodes in a cloud of fire and dust.

These are the schemers and dreamers of an enemy that is no longer derided as a mere annoyance. They clearly were not deterred by a speech by an American president with the gift of a honeyed tongue. One of them, captured in an ISIS video, tells young terrorists in training: “My message to my brothers who are stationed in the front lines. Remain steadfast and resolute. Allah is with you. Present your severed limbs, bodies and blood, and sacrifice them to Allah. Do not be weakened, do not grieve, as you are superior.”

The junior varsity is hardly superior, but it has good speechwriters, and is a wicked, clever and resourceful enemy, determined to destroy those who stand in the way of establishing a worldwide caliphate. Fortunately, the new president, unlike the old, understands that.