You are here: Home / Mediterranean / Islamic State tells supporters in Gaza: come join us In Egypt or Libya 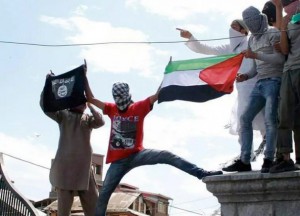 Palestinians supporting ISIS are being encouraged to leave the Gaza Strip and move to Egypt or Libya, where the Hamas-led government will not be able to track them, according to forums where Islamic State members operate.

The group, which is struggling to establish a footprint in the Palestinian territory that Hamas has controlled for years. Potential ISIS recruits were advised to try to use some of the tunnels Hamas has long been accused of using to smuggle weapons and supplies through, to make their way out of the Gaza Strip. “Your brothers in Sinai are only a five minute walk away from you,” says one message, “even though the border is closed, trust in God and pay $200 to the person who can get you through the tunnel.”

Other posts in the ISIS forum listed the names of Palestinians who traveled to Syria and Iraq to join ISIS and died in fighting there. At least one post, however, named Interior Ministry workers accused of arresting suspected ISIS members. ISIS has been trying to gain a foothold in the Strip, recently publishing an online magazine out of there, handing out Israeli-made space heaters to supporters, while also distributing leaflets criticizing Hamas for being backed by Iran.

Stepping on a flag belonging to the Sabereen, a Shiite movement in Gaza. Translation: You don’t have a place but under the feet of ISIS soldiers. Today your flags, tomorrow your heads. Hamas is arresting the Salafis in Gaza province.