The Philippines military dropped bombs from planes and rained artillery shells on southern rebels today, the third day of a siege of militants sympathetic to Islamic State, during which 35 guerrillas have been killed, the army said 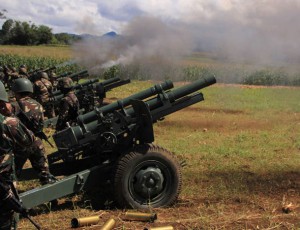 Several US-made OV-10B planes circled in the air before diving and dropping payloads on fortified positions of the Maute rebel group, which has occupied a town hall in Lanao province, said army spokesman Major Filemon Tan.

“As of noon today, there’s heavy engagement in the area as our troops are conducting clearing operations,” Tan said, adding 13 soldiers were wounded in the offensive, which began on Saturday.

Thousands of residents have fled as hundreds of troops, backed by heavy artillery and armoured vehicles, moved in to flush out the rebels.

The government has blamed the Maute Group for a Sept. 2 bombing at a street market in the hometown of Philippine President Rodrigo Duterte that killed 14 people and wounded dozens.

Several suspected members of the group were arrested a month later and, according to the defence minister, video clips were found of them pledging loyalty to the Islamic State cause.

Duterte has recently been warning about the possibility of Islamic State taking root in the Philippines if driven out of Iraq and Syria, saying his country needed to avoid their “contamination”, as did Malaysia and Indonesia.

Tan said the military was trying to contain fighting in the area and keep it from spilling over to other areas in Mindanao.

“A heavy fight is ongoing, but we hope to neutralise this Maute group soon,” he added.

Police conducted a controlled detonation of a home-made bomb found in a trash bin near the US embassy in Manila today and said the Maute group could be responsible because bomb components were similar to those used in the Davao attack.