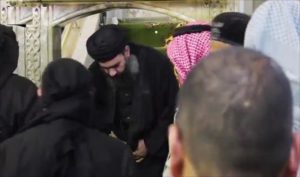 The Islamic State’s supreme leader has delivered a speech ordering his fighters to flee urban areas in Mosul, a presumable acknowledgement of defeat to U.S.-backed Iraqi forces and militias fighting to retake the city, like reported by iraqinews.com.

Alsumaria News quoted local sources saying that Abu Bakr al-Baghdadi made a “farewell speech” to his combatants in battlefields, ordering them to “flee and hide in mountainous areas” in Iraq and Syria. The text of the speech was disseminated among other speakers to read out to fighters at various areas in western Mosul.

The directives tell fighters to blow themselves up once encircled by Iraqi troops, the source claims, adding that senior commanders close to Baghdadi were moving on the borderline between Syria and Iraq. “The leaders of the so-called Mujahideen Shura (advisory) Council have all fled Nineveh and Tal Afar to Syria.”

Iraqi forces have made remarkable gains since launching a renewed offensive on February 19th to retake western Mosul from IS militants. The government said late January it had retaken the eastern side of the city following three months of fighting.

Military commanders from the Iraqi forces and the allied U.S.-led international military coalition have said IS resistance was remarkably weaker in the west compared to the east. Government forces became closer Tuesday to a government complex in central Mosul, having retaken the city’s airport, a major military base and a vital bridge linking both sides of the city.

Earlier this month, unconfirmed news claimed that Baghdadi, whose exact whereabouts remained unknown for long, had been seriously wounded when airstrikes targeted a senior leadership meeting he chaired near the borders with Syria.