Umar Haque showed beheading videos to children and instructed them to role-play terror attacks, like reported by theguardian.com 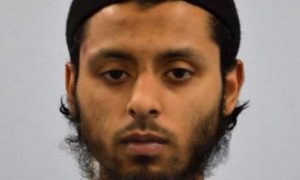 An Islamic extremist who attempted to build an army of child jihadists has been jailed for life with a minimum of 25 years for a range of terrorism offences.

Umar Haque was convicted of attempting to groom children as young as 11 at the Ripple Road mosque in Barking, east London, where he showed them footage of beheadings and did terrorism role-play exercises.

He also played Islamic State propaganda to students at the fee-paying Lantern of Knowledge Islamic school in east London, where he taught an Islamic studies class despite having no teaching qualifications and being employed only as an administrator.

The self-confessed Isis supporter was also convicted of planning to use guns and a car packed with explosives to strike 30 high-profile targets including Big Ben, the Queen’s Guard and Westfield shopping centre.

Haque was sentenced at the Old Bailey on Tuedsay by Mr Justice Haddon-Cave.

Police believe Haque attempted to radicalise at least 110 children at the mosque and the school, with 35 of them now receiving long-term support.

“His plan was to build an army of children,” said Commander Dean Haydon, the head of counter-terrorism at Scotland Yard. “He tried to prepare the children for martyrdom by making them role-play terrorist attacks in London. Part of that re-enactment included attacking police officers.”

Haque was employed as an administrator at Lantern of Knowledge school from September 2015 to September 2016 but also carried out duties as a classroom assistant. He was accused of using his laptop to project images of guns, knives and beheadings on to a whiteboard at the school, the court heard.

The trial heard it was “common ground” with the defence that Haque had played an Isis video to pupils at the Lantern of Knowledge but jurors were unable to agree a verdict on a charge of disseminating terrorist material at the school.

Haque was convicted of offences related to evening classes he ran at a madrasa based in a large marquee attached to the mosque in Ripple Road in late 2016 and early 2017.

He told the boys, who were aged about 11-14, that he had established contact with Isis and showed them a series of videos projected inside the marquee, ensuring the doors were closed.

The images included blood, wounds and people falling from buildings. One film showed the exhumation of a boy. Haque told the children the child’s body had deteriorated because he had been beaten after death when he was unable to answer questions put to him by angels.

He also directed the children in the madrasa to do push-ups and to race and grapple with each other in order to train them.

There were sessions of role-playing during which the children would be divided into police and attackers, and there were demonstrations on how to sever a head. After the Westminster Bridge attack by Khalid Masood last March, Haque used the atrocity as an inspiration for one of the role-playing exercises.

Haque was stopped at Heathrow airport in April 2016 as he attempted to board a flight to Istanbul, a common route to Syria for Isis recruits. As a result of searches conducted of his phone, he had his passport revoked the following month and police began investigating him.

The Charity Commission previously opened a statutory inquiry into the Lantern of Knowledge Educational Trust. It is also investigating the Ripple Road mosque.