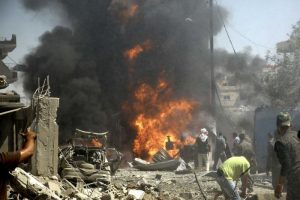 An Islamic State attack on Tuesday against a position held by the U.S.-backed Syrian Democratic Forces (SDF) in northeast Syria killed at least 32 people, like reported by reuters.com

The attack on a checkpoint at Rajm al-Salibi, the location of a refugee camp near the border between Syria and Iraq, led to violent clashes, the Observatory reported. More than 30 other people were also injured, it said.

The SDF, a coalition of Kurdish and Arab militias, has seized large swathes of northern Syria from Islamic State over the past 18 months and is engaged in a campaign to drive the jihadist group from its de facto regional capital of Raqqa.

On Monday, the SDF captured most of the strategically vital town of Tabqa, 40 km (25 miles) west of Raqqa along the Euphrates, it said.

It said on Tuesday that fierce fighting continued to capture the last few districts of the town as well as an adjacent dam, Syria’s largest, and the last major obstacle remaining before it can begin its assault on Raqqa.

Tuesday’s Islamic State attack on Rajm al-Salibi was targeted at the Asayish, a Kurdish security force that operates in northeast Syria, the Observatory said.