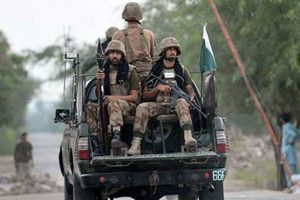 A Pakistani police official says two suicide bombers tried to storm a security post in the southwestern town of Mastung, killing three officers and wounding two in an attack that was claimed by the Islamic State group, like reported by foxnews.com.

Police official Wali Mohammad says the attackers tried to push their way into the Frontier Corps’ post. One detonated his explosives when the officers asked them to stop. He says the second attacker was killed by a sharpshooter.

A statement posted on an IS-affiliated website says two of its “martyrdom seekers” were behind the attack.

Mastung lies about 50 kilometers, or 30 miles, south of Quetta, the capital of Baluchistan province.

Baluchistan has also been the scene of a low-level insurgency by separatist groups that demand a greater share of the province’s resources.