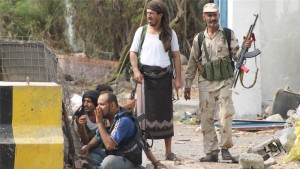 Four pro-government fighters were killed in a suspected IS suicide bomber attack in Yemen’s southern port city of Aden on Monday afternoon.

The bomber blew himself up at a checkpoint manned by the Popular Resistance, an anti-Houthi militia, in Aden’s neighborhood of Mansoura, the local official said on condition of anonymity.

Initial reports indicate that four fighters were killed while two others critically wounded at the scene, the source said.

Aden’s newly appointed governor issued a ban on Friday against carrying weapons in the city. Hundreds of Sudanese soldiers from the Saudi-led Arab coalition were deployed near government facilities and set up military checkpoints in neighborhoods in order to confiscate weapons.

So far no group has claimed responsibility for the suicide attack that targeted the Popular Resistance for the first time, but local security sources blamed the IS terrorist group.

The Yemen-based affiliate of the IS group had claimed responsibility for several suicide attacks that targeted Houthi-controlled mosques in the capital Sanaa this year.

On Oct. 6, Yemeni Prime Minister Khaled Bahah escaped unharmed as his temporary headquarters came under a series of bombings that killed more than 18 people mostly from the UAE forces.

The IS claimed the car bombings which also hit military installations used by Saudi-led coalition troops, particularly the base of the UAE forces in Aden’s Buraiga district.

The security situation in Yemen has sharply deteriorated since early March when conflicts erupted in several provinces in southern and northern regions.

Yemen, an impoverished Arab country, has been gripped for years by one of the most active regional al-Qaida insurgencies in the Middle East.