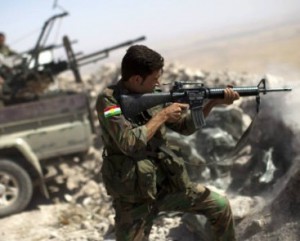 Syrian Kurdish fighters say they are clearing mines and booby traps from the border city of Tal Abyad after seizing it from Islamic State militants, BBC News reports.

Kurds raised their banners in place of black IS flags, celebrating their victory over the jihadist group. The capture of Tal Abyad gives them control of hundreds of kilometres of territory along the Turkish border.

Activists the Syrian Observatory for Human Rights said it was IS’ “biggest setback” since announcing a caliphate.

Tal Abyad was a major supply route for the group, acting as a gateway to its headquarters at Raqqa.

Days of fierce clashes around Tal Abyad prompted more than 16,000 civilians to flee their homes and cross the border with Turkey.

YPG fighters have been moving into IS territory on either side of Raqqa province since forcing the jihadists to withdraw from Kobane in January.

Their advance has prompted criticism from Turkish officials, who fear the growing power of Kurdish forces in Syria will embolden Turkey’s Kurdish minority.

On Monday, a group of 15 Syrian rebel factions accused the YPG of carrying out a “sectarian and ethnic cleansing campaign” against Arab and Turkmen civilians from Tal Abyad and the western countryside of neighbouring Hassakeh province as it advanced into IS territory.