At least 800 militants or more are taking positions in Tajikistan, Uzbekistan and Turkmenistan. Tajikistan is protected by Russian soldiers; Uzbekistan has the best and most experienced army in the region; Turkmenistan is the weakest state. Most of the fighters in Syria came from Central Asia, particularly from Kyrgyzstan, like reported by asianews.it 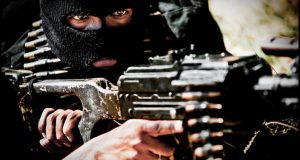 According to statements by US vice-president Michael Pence, the “Islamic State” (SI) no longer exists and the Caliphate is now completely disintegrated. Yet there are important signals on the strengthening of ISIS in Central Asia and especially in Tajikistan.

It is true that in Syria and Iraq, where for years Islamic radicals had their bases and controlled over half of the territory, there remains only small scattered and insignificant instances.

At present, on paper, the arrangement of forces in Syria and Iraq sees only a couple of small conurbations of the once powerful Isis, and they are destined to surrender. According to the US military, in both countries in recent years the terrorists have lost 98% of the areas under their control, and continue to withdraw until their eventual disappearance.

Yet the Isis fighters have not disappeared. According to the Turkish newspaper Khaber-turk, Isis is threatening the Caucasus and Central Asia: “The terrorists have focused mainly on the Afghan-Tajik border,” correspondents refer to the Ankara army.

Al Jazeera TV has also reported on the threat of Islamists in Central Asia, according to which survivors of the Isis forces from Syria and Iraq have moved to Afghanistan, and are trying to strengthen their positions.

Since the last reconstruction, the IS forces have regrouped mainly in the Afghan province of Badakhshan, on the border with Tajikistan. It is difficult to say how many Islamic soldiers are in those parts. According to US sources, there are about 800 people, but the Afghan security services assure that they are much more. IT is believed that the terrorists are moving on o the various countries of Central Asia from this area.

The three countries that directly border Afghanistan are the former Soviet republics of Tajikistan, Uzbekistan and Turkmenistan, and these would be the most at risk of Islamist infiltration. The most protected are the Uzbeks, whose border with Afghanistan is rather impervious, and can only be crossed through the Hairabad bridge; moreover, the Uzbek army is currently the strongest in the region.

In Tajikistan the situation is much more critical: the army and the government of the country are very weak, the Afghan border is much more permeable. In favor of the Tajiks there would however be a contingent of 5 thousand Russian soldiers, with an entire base of Putin’s army, stationed in the country to keep it under control for years. The Russians are currently carrying out border control work, at the explicit request of the Tajik president Emomali Rakhmon in his last meeting with Vladimir Putin.

According to current estimates, Turkmenistan is suffering most from all the infiltration of Isis. The country is very closed and isolated, and does allow the broadcasting of much information outside. According to experts, the Turkmen armed forces are very fragile, ill-equipped and still linked to the old Soviet systems of war management, without recent practical experience of resistance to external invasions.

Central Asia, moreover, is the native region of most Isis fighters; according to unofficial estimates, several hundred soldiers had arrived in Syria and Iraq from Turkmenistan, as well as from Uzbekistan and Tajikistan. The largest contingent, close to a thousand terrorists, seems to have come from Kyrgyzstan, where religious fanatics are active mainly in the cities of Osh and Jalal-Abad, on the border with Uzbekistan.

A first Isis terrorist action in Tajikistan was claimed on July 31. Two days earlier, seven foreign tourists suffered an attack in the Danghara region, 150 km from the capital Dushanbe. Two Americans, one Swiss, one Dutchman were killed; three other tourists were wounded. The group had been overtaken by a car and then attacked by armed men.