You are here: Home / MidEastGulf / Islamic State: statues in Palmyra will be destroyed 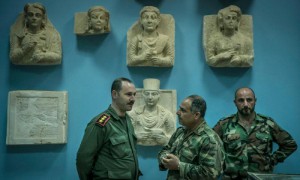 The iconic colonnades and buildings of the ancient Syrian city of Palmyra, which fell to the Islamic State group last week, “will not be harmed,” Abu Laith al-Saoudy, an ISIS military commander in the city, told an anti-regime Syrian radio station. However, he added, statues deemed polytheistic would be completely destroyed.

“Concerning the historic city, we will preserve it and it will not be harmed, God willing … we will not touch them [the monuments] with our bulldozers, as some people tend to believe,” the man, purported to be the ISIS commander, can be heard saying in the audio interview with Alwan FM. “What we will do is break the idols that the infidels used to worship.”

The capture of the ancient city was a key military gain for ISIS and came in the same week as the seizure of Ramadi in Iraq.

The militant group has a history of destroying statues and artifacts it believes to be idolatrous. In February, ISIS had released a video showing its members toppling 3,000-year-old statues in the Mosul museum in Iraq. It also showed the militants attacking these artifacts with power drills, sledgehammers and pickaxes.

The interview with the ISIS’ regional commander coincided with the release of a brief video clip by one of ISIS’ official media wing, showing the largely undamaged 2,000-year-old ruins of the city that have been named as “one of the most important cultural centers of the ancient world” by Unesco. The video also showed the city’s massive Roman theater and the famous Temple of Bel intact.

“They haven’t been damaged and members of the organization told residents that they will not damage the city’s antiquities, but will destroy the idols,” an unnamed activist working for the Local Coordination Committee for Tadmur — the modern name for Palmyra — told the Guardian. “Perhaps it’s because the Palmyra antiquities are mostly columns and large buildings and not statues of people, which they consider idols that must be destroyed, and they have no problem with the other antiquities.”

The Roman theater in Palmyra, meanwhile, is being used by ISIS to carry out executions of pro-regime fighters and civilians, according to the Syrian Observatory for Human Rights. Earlier this week, at least 20 people were executed in front of a crowd in the theater, which dates back to the second century.