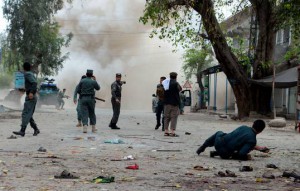 A Islamist suicide bomber launched an attack riding a motorbike against an Afghan bank building in Jalalabad, Afghanistan, according to reports by U.S. and Afghan officials. The bomb blast left at least 35 people dead and over a hundred wounded in an attack described by the war torn country’s president as being the handiwork of the Islamic State of Iraq and Syria (ISIS).

Obama’s former Director of Defense Intelligence Agency (DIA), Lieutenant General Michael Flynn, during an appearance on Fox News Channel, has said that while the administration was boasting that al-Qaida was on the run, the DIA was reporting to President Obama that it was far from being on the run. He also said Obama was informed that al-Qaida was growing and morphing into a larger, more powerful organization. However, according to Islamic terrorism expert James Peter Gronsky, that didn’t fit into the presidential narrative, so — with the help of Obama’s fellow-travelers in the news media — they intentionally lied to the American public.

This attack is a major event since it’s the first to have been perpetrated by the massive terrorist network that occupies one-third of the Arab countries of Iraq and Syria. ISIS has in fact declared its occupied territory as its first caliphate. What U.S. counter-terrorism analysts find disturbing is that ISIS is adding a deadly twist to the Afghan security forces’ battle against the Taliban and other jihadists as the U.S. and NATO forces have all but ended their combat missions.

“While President Barack Obama and the Pentagon tell the American people that ISIS is now in decline as a power to be reckoned with, the truth of the matter is that ISIS is actually growing in size and power,” said Edward Clonhague, a former police department’s intelligence officer. “There are reports that ISIS is involved in terrorist activity in Lebanon, Yemen, Libya, and other countries,” Clonhague said.

The ISIS attack in Jalalabad, capital of Nangarhar province, was aimed at a group of soldiers and civilians had been gathering outside the bank to obtain their government paychecks. The blast killed at least 35 people and wounded another 125, according to government statements.

Within a few hours following the sneak attack, President Ashraf Ghani blamed the Islamic State group for the bombing. “In the horrific incident in Nangarhar, who took responsibility? The Taliban didn’t claim responsibility. “Daesh” claimed responsibility for it,” Ghani said. Daesh is the Arabic acronym for ISIS.

Besides ISIS taking credit for the Kabal bombing, the Taliban’s leaders quickly denied it was responsible for this latest attack and another perpetrated elsewhere in the province in which one civilian died and two others were seriously wounded. “We condemn/deny involvement in both,” the Taliban’s Zabiullah Mujahid stated in a social media entry.

While the Obama administration is silent on ISIS activity in Afghanistan, Pakistan, Yemen and other countries that already were being targeted by radical Muslim organizations, President Ghani claims he had already warned President Barack Obama even before ISIS began to establish a presence in Afghanistan and actually enticed members of the Taliban to join their Islamist group. He claims that during his U.S. visit last month had repeated his military’s warnings that this expanding extremist group was becoming more and more powerful and prolific in Afghanistan.

President Ghani also blasted an attack on an army installation which 18 soldiers dead including the eight who were beheaded. Although ISIS didn’t claim responsibility, Ghani blamed the killings on what he termed “international terrorists.” He claims as a rule the Taliban don’t intentionally decapitate prisoners. Meanwhile, United Nations’ Assistant Secretary-General for Human Rights Ivan Simonovic called the attack a war crime.

“The use of suicide bombs and other devices in such an indiscriminate way by insurgent groups clearly constitutes a war crime, and those responsible for organizing or perpetrating such attacks must be brought to justice,” he said in a statement released on Saturday.

United Nations officials claim that the number of ISIS supporters in the Afghan-Pakistan region is smaller than other terrorist groups and they may face resistance from strong tribal leaders or Shiite Muslims. “However, the presence in Afghanistan of just a small ISIS cell or cells could increase the destabilization of the U.S. and NATO plan to end their roles in what Obama and the Democrats had called the “good war.”