You are here: Home / Mediterranean / Islamic State spreads in Libya 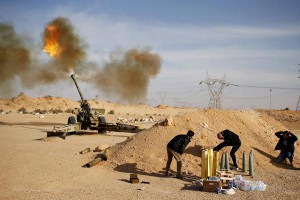 In a series of dramatic political and security-related developments last week, the Islamic State (Daesh) affiliate in Libya announced that it had strengthened its hold on the city of Sirte after having gained control of the city airport. Just prior to this, the 166th Brigade, which had been in charge of protecting the city, suddenly and mysteriously withdrew from its positions. Taking place against the backdrop of severe tensions between the two main camps in the country, these developments presage immanent changes in the fraught situation in Libya, especially in Tobruk and Tripoli.

Also last week, the internationally recognised government in Tobruk was shaken by severe sharp rifts in its ranks that exposed palpable confusion surrounding a House of Representatives session that was dedicated to questioning the interim government headed by Prime Minister Abdullah Al-Thinni following angry demonstrations in protest against his continuation in office. The session had to be delayed indefinitely due to inappropriate security circumstances. Al-Thinni had been the target of an assassination attempt after leaving the parliament building on the way to the airport Wednesday last week, when gunmen opened fire against him, missing him but wounding one of those accompanying him. The prime minister succeeded in taking cover in a nearby house.

In an official statement posted on the interim government’s Facebook page, Al-Thinni laid the blame for the incident on Libyan business magnate Hassoun Tatanaki, owner of the Libya First television channel. Tatanaki, he said, harboured a bitter rancour because he, the prime minister, had refused to appoint him head of the Libyan foreign investment portfolio, which controls assets of 67 billion Libyan dinars.

Al-Ahram Weekly has learned that Al-Thinni had intended to ask parliament to approve the appointment of Commander-General of the Libyan National Army Khalifa Haftar as minister of defence. The post is currently vacant and is still subject of major controversy among political factions in the House of Representatives, rendering the prospect of a consensus over any candidate difficult to attain.

In addition, Libyan sources from Tobruk on Saturday accused the National Forces Alliance (NFA) of deliberately sabotaging the parliamentary session that was to bring to task the interim government. Speaking to the Weekly by phone on the condition of anonymity, they argued that NFA Chairman Mahmoud Jibril feared that Haftar would attempt to seize power because of the approaching end of the House of Representatives’ constitutionally stipulated term, which is on 21 October.

The sources, which are connected to the house, added that Jibril believes that Haftar seeks to monopolise power and that “this will put an end to the political future of NFA leader Mahmoud Jibril.” Jibril is generally categorised as a liberal.

Meanwhile, in central Libya, Daesh seized control over Qardabiya Airbase to the south of Sirte, after the 166th Brigade, which had been in charge of protecting the city, suddenly withdrew from their positions around the city Wednesday evening. Some observers see this development as a major turning point for the extremist organisation which has begun to spread rapidly across parts of central Libya, especially after a number of members of Ansar Al-Sharia, which had controlled Sirte, joined the organisation that had infiltrated into the country from abroad.

After seizing control of Sirte, the organisation vowed to intensify its attacks against Libya Dawn forces, targeting in particular Misrata, from which these forces are commanded. On Sunday, a suicide bomber struck at Al-Dafniya gate, a major commercial entrance into the city from the west. The assault, carried out by a Tunisian called Abu Wahib Al-Tunisi, killed five and wounded six, all security personnel at the site of the attack.

In the aftermath of the attack, the Misrata municipal council levelled harsh criticisms at the General National Congress (GNC) and National Salvation Government in Tripoli, which is not internationally recognised. Either they should assume their responsibilities to safeguard security or they should authorise the municipal council to perform that function using the security agencies in the city, the municipal council authorities wrote in a statement issued following the latest Daesh attack against Misrata. The statement also demanded from Tripoli a “clear and unequivocal declaration, before the Libyan people, of their sincerity in fighting terrorism and extremism”.

The criticisms levelled by the Misrata municipal council may pave the way for a form of disengagement from Libya Dawn forces. Observers have described Misrata as the backbone of the Libya Dawn coalition, which is a collection of militias affiliated with Misrata and other urban centres in the west. Another possible indication of an intent to disassociate from that militia coalition was a recent visit by a delegation from the Misrata municipal council to the UAE and Algeria, in which the delegation had demonstrated a degree of flexibility on hostilities in the western zone, in which Misrata residents have lost many lives.

Fathi Bashagha, an MP from Misrata who is one of the members of the House of Representative boycotting that parliament, lashed out against the so-called “defenders of the February Revolution” for “inciting Misrata to fight for the unknown”. By the “defenders of the February Revolution” he was referring to the de facto authorities in Tripoli and the Islamist forces that dominate the GNC (General National Congress) there.

On the diplomatic front, the representatives from Libyan elected municipal and local councils concluded their third meeting on Saturday in Tunisia after UN Envoy Bernardino Leon brought them up to date on the latest developments in the main track of the UN-sponsored dialogue between the Libyan factions being held in Skhirat, Morocco. Following the meeting, Leon said that he would present a fourth draft agreement for a political and security solution to the Libyan crisis to the participants at Skhirat when they convene for the fifth round, which is scheduled for next week. The participants on this track include representatives from the resurrected GNC in Tripoli, representatives from the House of Representatives in Tobruk, and independent political figures.

Mayors and representatives from the Libyan municipal councils released a closing statement following their dialogue in Tunis saying that the only way to emerge from the current political crisis and military conflict in Libya is through the framework of a comprehensive political process that places the country once more on the path to democratic transformation. The statement welcomed the ceasefire initiatives signed by a number of municipal and local councils from different Libya towns and cities. It lauded in particular the agreement between Misrata and Tawergha and expressed hope that this would encourage other municipalities to take part in the cause of displaced persons and the search for a solution to their plight.

Municipal representatives also voiced their full support for the impartial role being performed by the UN in Libya through its management of the Libyan political dialogue process, and expressed their hopes for its rapid progress and success. They urged all parties to take the opportunity of the approaching holy month of Ramadan to release any persons they may have under illegal detention and to guarantee a fair trial to other detainees.

Back in Libya, hostilities in their various arenas persist with no end in sight while the human toll mounts. Local inhabitants are finding it increasingly difficult to obtain the daily necessities of life against a general background of ongoing combat and lack of security. The deterioration is further aggravated by increased division amidst the alarming spread of Daesh, which has taken advantage of the vast chasms between the warring parties in the east and west to move into strategic areas near the petroleum fields and the oil exporting ports in the central coastal region.

In spite of some initiatives to contain the crisis that has begun to spiral in the western area, and some prisoner exchange processes between the warring factions, attempts to promote a lasting ceasefire remain fragile in view of the continued lack of a solid foundation that would enable them to withstand the tremors of political fluctuations.