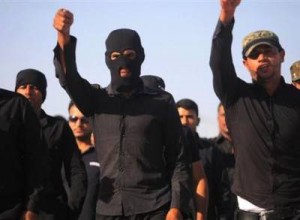 Islamic State leaders in Syria have sent money, trainers and fighters to Libya in increasing numbers, raising new concerns for the U.S. that the militant group is gaining traction in its attempts to broaden its reach and expand its influence.
In recent months, U.S. military officials said, Islamic State has solidified its foothold in Libya as it searches for ways to capitalize on rising popularity among extremist groups around the world.

ISIL now has an operational presence in Libya, and they have aspirations to make Libya their African hub, said one U.S. military official, using an acronym for the group.

Islamic State growth as a powerful anti-Western force has militant groups throughout the world trying to latch onto its notoriety. But until recently, affiliates have operated with a great degree of independence and there was little evidence they were taking orders from the group core leadership in Syria and Iraq, American officials said.

The core group benefited by pointing to the mushrooming number of affiliates to show its self-styled caliphate was expanding. But the gains in North Africa mark the first expansion of the group reach outside the Middle East beyond rebranding efforts by militants trying to secure direct support from the Syrian-based extremists, U.S. officials said.

Islamic State foothold in Libya also gives the group a new staging base to plan attacks in North Africa and across the Mediterranean Sea in Europe.

The European Union agreed Monday to launch a mission against human-smuggling gangs operating out of Libya. However, the EU has said the mission isnt aimed at countering the growing threat of Islamic State in Libya.

The U.S. military is reluctant to expand the continuing air campaign against Islamic State in Iraq and Syria to North Africa. And there are no trusted forces in Libya that America can work with to capitalize on bombings, as the U.S. is doing in Iraq.

How do we stop it? said the U.S. military official. It a huge concern.

U.S. military officials said the best way to prevent the group from expanding its global control is to focus on its Middle East strongholds.

Right now we are hitting them at their roots, and that Iraq and Syria, said a senior U.S. military official.

Extremists from West Africa to Afghanistan have raised Islamic Stateblack flag and vowed to follow the group leader, Abu Bakr al-Baghdadi. In most cases, however, those vows haven’t translated into significant efforts by Islamic State to establish ties or expand its outreach, according to U.S. officials and Middle East analysts.

But the shift in ties between Islamic State and militants in Libya indicates that the radical group is working more seriously to capitalize on its global popularity among fractured extremists groups. Deeper ties in Libya could give Islamic State the ability to extend its influence farther into Africa, where groups such as Boko Haram in Nigeria have pledged allegiance to the radical Sunni force.

They are the hot brand right now, said the senior U.S. military official. They have got more sophisticated messaging and are just clearly more advanced than these other organizations are.

Some U.S. officials and experts also see signs that the militant force is trying to solidify ties with Islamist militants in Egypt’s Sinai Peninsula despite facing a formidable counterweight from the country military. There are some indications that Islamic State in Syria has sent small amounts of money to allies in Sinai, but U.S. officials are more concerned about the growing ties with militants in Libya.

Beyond that, U.S. officials see few signs so far that Islamic State leaders have established meaningful ties with regional militant forces that have pledged to fight for the self-declared caliphate.

Islamic State leaders haven’t yet tried to push the boundaries of influence into places such as Yemen, Afghanistan and Pakistan where long-established extremist forces are resistant to the Sunni group designs on creating a global Islamic caliphate, U.S. officials said.

The other big issue for Islamic State forces is strategic: The group has to prioritize where and how to use its money and manpower to extend its power beyond Iraq and Syria, where its fighters are being bombed daily by U.S. forces.

Islamic State also has to consider how to allocate its resources at a time when American officials say they have put a significant dent in its ability to raise money by selling oil and robbing banks.

That effort gained new momentum on Saturday when U.S. special operations forces carried out a raid in Syria that killed a key Islamic State financier and scooped up intelligence that could help America clamp down more tightly on the group’s money.

The key question is whether ISIL can keep the population under their control happy while continuing to fund operations, said one U.S. counterterrorism official. We don’t think they can, and our assessment is that what they need to do to keep the population satisfied in terms of the provision of social services will outstrip ISIL’s ability to accrue wealth to maintain its operational tempo.

Islamic State has found Libya to be the most favorable new frontier.

In recent months, U.S. defense officials said, the group in Syria has sent small amounts of money and military trainers to Libya, where they have aligned themselves with local militants, including some who spent time fighting with Islamic State forces in Syria.

ISIL is very much like a balloon, said one senior defense official. When you squeeze it, it moves elsewhere. They have shown that in Iraq, to some degree, where they live to fight another day.

Islamic State is using couriers and local, informal money transfer systems known as hawalas–akin to Western Union, but without the documentation–to pump money into Libya, according to U.S. officials. The amounts are stillbelieved to be relatively small.

To claim some legitimacy and establish their intentions, Islamic State forces in Libya have adopted the group’s brutal tactics. In April, the group released a video showing masked fighters beheading dozens of Ethiopian Christians. Earlier this month, the group released another video showing Libyan fighters pledging support for Islamic State and staging a series of attacks and summary executions in the eastern city of Benghazi.

The video features an Egyptian fighter identified as Abu Ahmed al-Masri, who urges fighters in the Libyan city of Misrata to join their cause.

For you, oh Muslims in Misrata, fear Allah, your lord, he says in the video, according to a translation by SITE Intelligence Group. This is the Islamic State. It is your state.

Mr. Masri, who was reportedly killed after making the video, was believed to be among a growing core of foreign fighters coming primarily from neighboring countries to bolster the Islamic State campaign in Libya.

Among the younger generation of jihadists, the ISIS brand is very appealing, said Fred Wehrey, a Middle East researcher Carnegie Endowment for International Peace. The appeal is that you don’t need to go all the way to Syria and Iraq…to fight for the caliphate.