You are here: Home / MidEastGulf / Islamic State shock and awe in Mosul 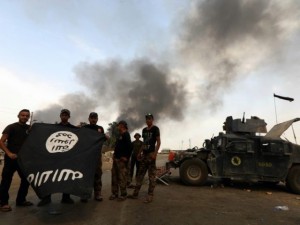 As the battle for Mosul enters its second week, the so-called Islamic State’s years of entrenchment in the city ensures a full demonstration of the tactics available to the group. From medieval defensive techniques, to 20th century trench warfare and insurgent drone attacks, the Mosul battlefield is a unique mismatch of tactics from all eras. By resorting to an innovative blend of terrorist, insurgent, and conventional military tactics in a dense civilian environment, the Islamic State has ensured that it will face the city’s liberators on its own terms. The diverse defensive measures serve to tactically subvert the asymmetric military balance between the group and its enemies, and to elevate the group’s defense of the city into a grandiose spectacle.

While the Islamic State knows that it cannot hold Mosul against the overwhelming military force amassed against it, it is keenly aware of the battle’s high stakes. Since taking the city in 2014, the group has systematically militarized the city’s defenses, creating an urban warfare nightmare for advancing forces. In tactics reminiscent of World War I, the approach to the city has been slowed by trenches, offering Islamic State fighters cover and concealment against infantry and armor advancing across open terrain. Underground, the city has been turned into a hive of tunnels and bunkers, allowing the group to quickly shift its forces in reaction to enemy advances, and to negate the advantage of air support and surveillance enjoyed by advancing forces. As Islamic State fighters retreat in the face of the enemy advance, waves of suicide bombers lie in wait, often emerging from concealed tunnels and bunkers to attack the enemy from behind. The city itself is reportedly surrounded by a two-meter wide oil-filled mote, suggesting a resort to medieval tactics and evoking the historic imagery for which the group is renowned.

Beyond the immediate battlefield considerations, the Islamic State uses various tactics that play to a global audience of supporters. For example, the group’s employment of explosive-laden commercial drones—more accurately described as airborne IEDs—is a valuable sensational headline, as well as a novel and terrifying tactic against enemy forces. For a group that has proven adept at utilizing the spectacle of terror, such innovative tactics in the battle for Mosul will likely be the subject of high-quality propaganda. The imagery of anti-Islamic State forces—labeled ‘crusaders’ and ‘apostates’—attacking these defenses will not be lost on the Islamic State’s sympathetic audience.

The technological and military advantage of anti-Islamic State forces will ultimately prevail in the battle for Mosul, but the group’s diverse defenses ensure that the battle will be a drawn-out and costly endeavor. As parties to the conflict jostle for political advantages in the battle’s aftermath, the Islamic State will buy time through any tactic necessary, enjoying its current international attention, and continuing to devise its long-term survival. As the battle for Mosul continues, the city will remain the stage for an agonizingly-slow, and tactically diverse display of the Islamic State’s military prowess.