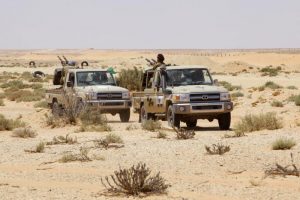 Islamic State militants in Libya set up a desert army composed of at least three brigades after they lost their stronghold of Sirte last year, a senior prosecutor said, like reported by reuters.com.

Hundreds of militants are believed to have escaped from Sirte before or during the seven-month campaign to oust the jihadist group from the coastal city, which it took control of in 2015.

Sheltering in desert camps, fugitive militants have become emboldened in recent weeks, occasionally setting up checkpoints on roads to the south and east of Sirte and claiming two deadly attacks against local forces.

The United States, which provided air support for the Sirte campaign, has conducted three sets of air strikes targeting the camps – one in January, one on Sept. 22, and one on Tuesday.

After the first strikes some wounded militants had been arrested and some “materials” seized, Sadiq Al-Sour, head of investigations for the Attorney General’s office, said at a news conference in Tripoli.

“This army was established after the liberation of the city of Sirte… Now they are in the Libyan desert,” said Sour.

Separately, Sour said authorities had arrested a senior Islamic State commander who supervised the beheading of 21 Coptic Christians from Egypt in Sirte in February 2015.

“He gave details on the incident and indicated their place of burial,” Sour said. “We are seeking with military authorities in the central region to discover where the bodies are, and hopefully we will find them, despite the time that has passed.”

Egypt launched air strikes in Libya a day after Islamic State released a video showing the Copts being beheaded on a beach.

Sour said that in the past, Islamic State had used established routes to bring foreign fighters into Libya from neighbouring countries including Sudan, Egypt, Tunisia and Algeria.

The largest number of fighters had been brought in from Sudan and transited through the Libyan city of Ajdabiya, about 350 km (218 miles) east of Sirte, he said.