You are here: Home / MidEastGulf / Islamic State sends top cleric to show off control over Ramadi 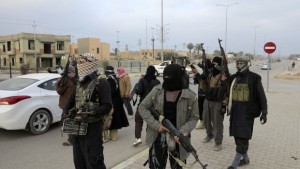 The Islamic State of Iraq and the Levant (Isil) appeared to be sealing control of a third powerbase across Iraq and Syria, sending one of its most senior religious leaders to address residents in the recently captured city of Ramadi.

The Iraqi city, which fell to a fierce assault by Isil on May 17, is the third provincial capital to be captured by the extremists since their lightning sweep through the two countries last year.

Ramadi residents said a man with one hand and a shrouded head delivered a victory speech from Ramadi’s Grand Mosque after evening prayers on Wednesday. The speech reportedly included a promise to the city’s Sunni residents that they would not be harmed.

Hisham al-Hashimi, an Iraqi government advisor who monitors Isil, identified the man as Ali Attiya al-Jubouri, also known as Abu Asim, or “the blind judge of the Islamic State”.

He described Jubouri as “the second-highest religious authority” after Isil’s leader, Abu Bakr al-Baghdadi, and the fifth most senior official in the group. Baghdadi himself is believed to have been incapacitated with spinal injuries since his convoy was hit by a US-led coalition airstrike on March 18.

The capture of Ramadi was Isil’s most significant military victory in a year. The appearance of such a senior official in a newly captured provincial capital suggests Isil wants to send a high-profile message of control, even as thousands of mostly Iran-backed Shia paramilitaries lead an offensive to retake the city.

Iraqi government forces have also been deployed. Troops had fled the city after Isil’s deadly assault, which began with as many as ten car bombs.

The militants have already unleashed a wave of suicide attacks targeting pro-government troops in western Anbar. As many as 17 soldiers were killed in the explosions that took place outside the Isil-held town of Fallujah on Wednesday.

On Thursday, US Defence Secretary Ash Carter told reporters that the Pentagon was examining ways of better equipping and training Iraq’s security forces. He had previously criticised Baghdad’s troops for “lacking the will’ to fight.

The push for Ramadi follows the Iraqi military’s prolonged and bloody recapturing of the city of Tikrit.

The offensive, which eventually succeeded with the backing of the US-led coalition’s air power, has allowed Iraqi authorities to begin exhuming the bodies of soldiers killed in what has become known as the Speicher massacre, an event now seared in the minds of the country’s Shia population.

In June 2014, Isil gunned down as many as 1,700 young army recruits, most of them Shia. Some were pushed into the Tigris river, while others were hastily buried in the mass graves that continue to be uncovered by government workers.

Iraq’s health minister said on Thursday that they had exhumed 470 bodies to date. Adila Hammoud told a press conference that the corpses had been lain several layers thick.