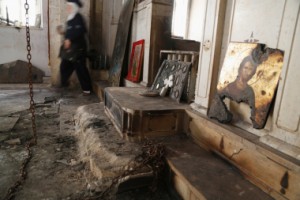 Having looted and pillaged ancient heritage sites across Iraq and Syria, Islamic State is now believed to be selling stolen artefacts on social media sites.

Facebook has now taken down pages thought to be selling artefacts such as coins, statues and manuscripts written in both Hebrew and Aramaic. It is thought that the items have all come from Syria.

Washington DC-based journalist Zaid Benjamin was the first to highlight the issue, posting screenshots of the pages to Twitter on June 4.
A privacy spokesman for Facebook told Fox News: “We may not always be able to identify artefacts as stolen, but insofar as we can when someone reports content to us, we will remove this content.”

ISIS militants have taken millions of pounds worth of artefacts from ancient buildings, including churches, across Iraq and Syria since the group began its uprising. A senior Iraqi intelligence official told the Guardian last year that jihadists had taken $36million, around £23million, from the al-Nabuk area – a mountainous region west of Damascus.

President of the Belgian federal police council, Willy Bruggeman, then told The Times in December that Western collectors are thought to be in direct contact with ISIS.

Militants are “using their own networks to come into contact with the final buyers…they want to have a one-to-one relationship with the collectors,” Bruggeman claimed. He said murals and masonry ripped from church walls are among the most commonly traded artefacts, and attacking religious sites is a means by which ISIS can “undermine the morale of the communities they invade”.

According to Fox News, stolen goods are usually transported through Turkey or Lebanon, where they are offered for sale. The International Council of Museums has issued a ‘red list’ to help police and custom officials to identify artefacts which have been taken illegally, but American imports of ancient artefacts from the Middle East and North Africa apparently increased significantly between 2011 and 2013.