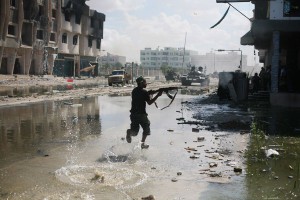 Islamic State militants have seized a power plant west of the Libyan city of Sirte, the group and a military source said on Tuesday.

“The plant … was taken,” Islamic State said in a message on social media. “Now the city of Sirte has been freed completely.”

Forces loyal to the self-declared government that controls the Libyan capital Tripoli pulled out of Sirte after Islamic State attacked the plant. Three soldiers were killed in the attack, the military source said.