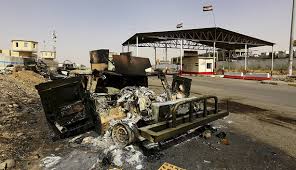 Government forces withdrew from al-Tanf – known as al-Waleed in Iraq – crossing as IS advanced, the Syrian Observatory for Human Rights (SOHR) said.

The loss of al-Tanf to IS follows the group’s takeover of the ancient city of Palmyra on Thursday, May 21.

The U.S. says that fighting the militants will be a “difficult challenge”.

The militants dominate the provinces of Deir Ez-Zor and Raqqa and have a strong presence in Hasakeh, Aleppo, Homs and Hama. However, correspondents say there are large areas under IS control in the east that are not very significant strategically.