You are here: Home / MidEastGulf / Islamic State seizes houses of 300 Kurds in Aleppo 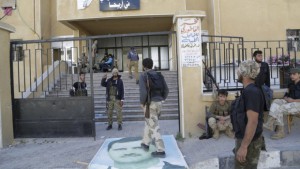 The Islamic State (IS) seized 300 houses belonging to Kurds in the town of Manbij over 10 days, after they decided to clear the area of Kurds, pro-Kurdish news agency Hawar reported Tuesday.

Local reporters said IS took the decision to take over the houses of 300 civilians to clear the region of Kurds and their homes and property, worrying they could either support the Free Syrian Army (FSA) rebels or the People’s Protection Units (YPG).

After the houses were taken by IS, militants wrote on the walls, “The return of homes to the Islamic State.”

The town of Manbij is in the province of Aleppo and located 60 kms southwest of the countryside of Kobani.

The YPG and anti-IS rebel groups have stated they want to take control of the last remaining IS-controlled territories along the Turkish border.

Turkey says it will not allow Kurds to take over these areas from IS.