You are here: Home / Senza categoria / Islamic State says Norwegian and Chinese hostages are ‘For Sale’ 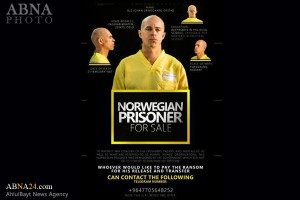 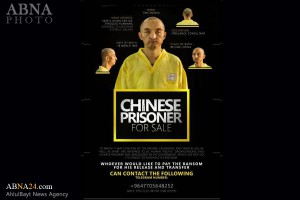 Two men stand in yellow jumpsuits, staring toward the camera with a chilling message posted below their portraits: “FOR SALE.”

The images, tucked away in the final pages of the latest edition of the ISIS online magazine Dabiq, are part of a troubling new claim: The terrorist group says it’s holding two more foreign nationals hostage.

The pages show images of the men from several angles and ask for an undisclosed ransom to pay for their “release and transfer.” The men appear to be wearing tags with their names and identification number. The magazine also lists each man’s purported occupation, place of birth, date of birth and home address.

An ominous warning appears beneath an Iraqi phone number at the bottom of each page: “Note: This is a limited time offer.”

Speaking to reporters in Oslo late Wednesday, Norwegian Prime Minister Erna Solberg confirmedthat a Norwegian man in his 40s was being held hostage in Syria, and “everything indicates” that ISIS is responsible. The man was kidnapped at the end of January and held hostage by different groups, she said. Now, he’s believed to be an ISIS hostage, according to the Prime Minister.

The kidnappers have asked for specific ransom amounts several times, she said, but Norway will not pay.

“This is a matter that the government is taking very seriously. We neither can nor will give in to pressure from terrorists and criminals. Norway does not pay ransom,” she said. “This is a principle we cannot depart from in the face of cynical terrorists. Payment of ransom would increase the risk that other Norwegian nationals will be taken hostage.”

ISIS has taken dozens of international hostages, often seeking ransoms for them to swell its coffers.

Some governments have reportedly handed over hefty sums of cash. In other cases, where money isn’t forthcoming, the Islamic militant group has publicized its barbaric killings of the hostages, apparently in an effort to score propaganda points with its extremist followers.