You are here: Home / West Asia / Islamic State says it gunned down italian citizen in Bangladesh 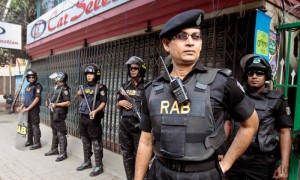 The Islamic State militant group claimed responsibility for gunning down an Italian citizen on the street in the diplomatic quarter of Bangladesh’s capital, according to an intelligence group monitoring jihadist threats.

The claim by the Sunni extremist group could not immediately be verified independently, but if confirmed would mark the group’s first attack in the secular South Asian nation. Bangladesh has been struggling in recent months with the rapid rise of hardline Islamist groups, banning several that have been blamed in the killing of four bloggers this year.

Police in Dhaka said they had no leads in tracing the three unidentified assailants who, riding on a single motorcycle, drove up alongside Italian citizen Cesare Tavella and shot him Monday night.

“We have no idea, we can’t say anything definitively for now,” police official Mukhlesur Rahman said, declining to comment on the IS claim of responsibility. “Let the investigation happen.”

Witnesses said they heard at least three gunshots and saw the attackers flee after Tavella fell to the ground, according to police. Tavella was taken to a nearby hospital, where doctors declared him dead. The Italian consulate could not immediately be reached for comment.

Tavella, in his 50s, had been living alone in Dhaka after arriving in May to work on food security issues for a Netherlands-based church cooperative called ICCO, according to his colleague Alo Rani Dhali.

The Islamic State reportedly said in a statement dated Monday that a “security detachment” had tracked and killed Tavella with “silenced weapons” in Dhaka, according to the SITE intelligence group’s website. It was not immediately clear how close the witnesses were to the attack, and how the gunshots could have been heard if a silencer was used.

It warned that “citizens of the crusader coalition” would not be safe in Muslim nations. Almost 90 percent of Bangladesh’s 160 million population practices Islam.

One of the witnesses, Sitara Begum, said she was terrified upon hearing the shots while she was sitting on the road at an intersection the near the scene of the attack.

“I was looking at the east side of the road, but hearing the gunshots I looked at the west side and saw two men run and get onto a waiting bike. They fled quickly,” Begum said.

Despite the government’s banning several radical Islamist groups from the country, intelligence sources have confirmed that several hardline groups are active in Bangladesh. The local group Ansarullah Bangla Team, which has apparent links with al-Qaida on the Indian subcontinent, has claimed responsibility for killing four bloggers who criticized Islam’s Prophet Muhammed and radical Islam.