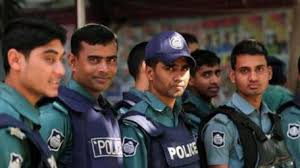 The Islamic State, in statements attributed to it, claimed responsibility for an attack near the Bangladeshi capital that left one police officer dead and another wounded, according to the SITE Intelligence Group, which monitors extremist activity online.

The attack took place Wednesday at a checkpoint along a street about 30 miles from the capital, Dhaka, in what appeared to be the first assault on representatives of the Bangladeshi state to be claimed by the Islamic State. It comes as extremist violence is rising and as threats against vocal secularists in the country are increasing.