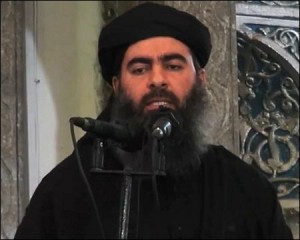 Islamic State group (IS) has released an audio message it says is from its leader, Abu Bakr al-Baghdadi. The message urges Muslims to emigrate to the “caliphate” it has proclaimed in areas of Syria and Iraq. A reference to the Yemen conflict means it is recent.

Baghdadi’s fate has been unclear amid reports of air strikes by the US-led coalition that is opposing IS.

Islamic State group leader Abu Bakr al-Baghdadi called on all Muslims to fight the “war” against the enemy in a rare audio statement released on Thursday. The group’s al-Furqan media wing released the 35-minute recording after weeks of rumors that Baghdadi had been seriously injured by a U.S.-led coalition airstrike in Iraq.

“Do not think the war that we are waging is the Islamic State’s war alone,” Baghdadi allegedly said in the recording. “It is the war of every Muslim in every place, and the Islamic State is merely the spearhead in this war.”

There was no indication of when the statement was recorded, so it cannot be taken as an indicator of Baghdadi’s good health.

Baghdadi called on all Muslims to make their way to the militant group also known as ISIS’ so-called caliphate. He warned that those who had strayed from the caliphate should  repent “while our swords are at a distance of two bow lengths or nearer from your necks.”

Though his call for hijrah (emigration) was to all Muslims, he specified the importance of hijrah to Sunni Muslims living as refugees in Iraq under Shiite or Kurdish authorities. Gaining followers in refugee camps will allow the militant group to extend its reach in areas of Iraq it has not yet been able to seize.

In the statement, Baghdadi also made it a point to “commend” the ISIS fighters in several of its other provinces like Yemen, Algeria, Libya, Tunisia and West Africa. He did not accept the allegiance of any new groups, nor did he announce any plans for expansion of the caliphate.

BBC security analyst Frank Gardner said that since we don’t actually see him he could, of course, be physically incapacitated. But the lengthy, 33-minute speech does not sound like one made by someone in failing health. The speaker, who makes continual use of religious quotations, exhorts Muslims around the world to join forces with his group.

Most significantly, he mentions the Saudi-led bombing campaign in Yemen which began on 26 March, meaning this recording can be no more than seven weeks old.

Baghdadi’s last message was in November.

Baghdadi’s only public appearance was to deliver a sermon in Mosul in Iraq after IS took the city last July.

An Iraqi interior ministry spokesman said in April that Baghdadi had been seriously wounded in a coalition air strike in March.

However, the Pentagon said it had no information on that, and other reports last year of him being injured proved to be inaccurate.

The Iraqi ministry of defence said on Wednesday that the second-in-command of IS, Abdul Rahman Mustafa Mohammed, was killed in an undated coalition air strike on a mosque in northern Iraq.

But the US said coalition planes had not attacked a mosque.