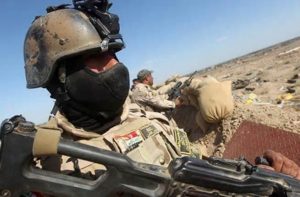 Taking advantage of the rivalry between the central government and the Kurdistan Regional Government, Islamic State is regrouping and increasing deadly attacks in disputed territories across northern Iraq, Kurdish and Iraqi officials warned according to voanews.com.

The Iraqi government declared a final victory over IS last December after Iraqi forces drove its last remnants from the country.

IS militants have since reverted to guerrilla warfare tactics, particularly in Kirkuk, northern Saladin and eastern Diyala, where both the Iraqi central government and the Kurdistan Regional Government claim control.

Ali al-Husaini, the spokesman of the Shiite Popular Mobilization Forces (PMF) in northern Iraq, accused IS of attempting to turn the territories into a hotbed by fueling tensions between Kurds, Arabs and Turkmen.

Rich with abundant natural resources, the disputed territories have been the core of decades-long conflict between the Iraqi government and the Kurds.

The Kurds say the former Iraqi government under Saddam Hussein changed the demographics of the area by displacing Kurds and Assyrians and settling Arab tribes. Article 140 of the current Iraqi constitution requires that measures have to be taken to reverse the changes before people of the areas hold a referendum to decide their fate.

The referendum was supposed to take place on November 2007 but has been repeatedly delayed, and the area remains contested.

“IS terrorists want to create chaos by resorting to attacks in the form of gang militancy,” al-Husaini told VOA. “They want to create divisions among the components of this area and prove they still have power in Iraq.”

He said IS fighters have increased their hit-and-run attacks in towns and villages to obstruct the upcoming Iraqi parliamentary elections scheduled for May.

In recent weeks, Iraqi security forces have blamed suspected IS insurgents for several deadly attacks carried out in the disputed areas.

On Saturday, the Iraqi federal police announced eight of its members were killed after being abducted on the Kirkuk road to Baghdad. IS social media accounts shared photos of what they claimed to be federal police personnel lined up before being shot by masked militants.

That attack follows another deadly assault last month when IS militants killed 27 members on the Popular Mobilization Forces during an ambush in Hawija, south of Kirkuk.

Azad Hamid Shafi, head of the Mandali town council in eastern Diyala province, told VOA that most IS attacks are conducted by isolated cells who disguise themselves in Iraqi army uniforms and set up fake checkpoints.

Shafi said IS also uses those checkpoints to make money by kidnapping people and asking for large sums of ransom.

“Those fighters have created terror among people and limited movement in isolated towns and villages, especially at night,” he said.

He added that IS fighters earlier this month killed five Iraqi troops and took all their belongings after ambushing them in a bogus checkpoint south of Mandali.

In a separate incident, a spokesman of Khurmatu municipality in Saladin province, Muhammad Fayaq, told VOA that IS last week killed 21 members of two families, including their children, after stopping them at a fake checkpoint on Daquq-Tuz Khurmatu Road.

Kurdish officials said the recent increase of IS activity in the disputed territories is due to the security gap created by the withdrawal in October of 2017 of Kurdish fighters, known as Peshmerga forces.

“Kurdistan’s Peshmerga was spread out across 30 kilometers of Kirkuk-Baghdad Road. This road now remains mostly unprotected, because Iraqi government forces only have a few checkpoints on the main highway,” Edris Adil, head of the Kurdish Patriotic Union Party in Daquq, told VOA.

“IS fighters are freely moving across villages and plains,” he said.

The Peshmerga took control of most of these territories in June 2014, when the Iraqi forces left their bases following a large-scale push by the IS.

The Kurdish leaders said they were not willing to withdraw after the IS defeat because “Article 140 has been implemented.”

Iraqi government forces and allied PMF regained control in mid-October 2017, following the Kurdish Regional Government’s controversial independence referendum and the inclusion of those territories in the vote.