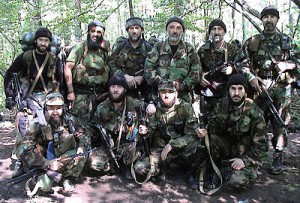 Islamic State recruiters are increasingly targeting ethnic Chechens living in northern Georgia, and parents of some recruits are accusing Georgian authorities of doing nothing to stop the outflow.

The 50 to 100 Chechen Georgians believed to be fighting in Syria are among a much larger number fighting in Syria from around the region, particularly from Russia’s North Caucasus, where Chechnya itself is located.

It’s a trend that could threaten the stability of the entire Caucasus: If radicalized, battle-hardened fighters eventually begin returning to a region long troubled by poverty and Islamic terrorism.

“The investigating agencies know better than us what is going on here and who is trying to send our youth to the slaughter in Syria,” said Meka Khangovshili, who has helped found an advocacy group to stop the recruiting effort.

Earlier this month, Muslim Kushtanashvili, a 16-year-old from Georgia’s Pankisi Gorge, left the country without notifying his parents, and later texted his parents from Turkey, on his way to Syria. Authorities later said border guards were negligent in allowing him to leave without parental permission.

“A majority of those who got to Syria know nothing about weapons: they don’t know how to shoot. And most of them have never even traveled outside of their own villages,” said another woman, Elizbar Magroshvili, a resident of the Pankisi town of Duisi. “They are being used as cannon fodder.”

Most Chechens living in Georgia, known as Kists, are descendants of those who settled in Pankisi’s rugged terrain in the 18th century. The region saw floods of refugees from Chechnya during the two wars that Russia fought there in the 1990s and 2000s.

The gorge, which is home to about 11,000 people in all, is near the Russian border with Chechnya and Dagestan, which also is racked by terrorist violence.

Analysts have said Chechen fighters are playing an important role in the battlefield gains seen by Islamic State in Syria and Iraq. One of the group’s top military leaders is Tarkhan Batirashvili, a 28-year-old Georgian who now goes by Omar al-Shishani. The U.S. Treasury Department last year put Batirashvili on its list of “Specially Designated Global Terrorists.”

Georgian authorities have long taken a mainly hands-off approach to Pankisi communities. In the early 2000s, during the second Chechen war, Moscow routinely complained that Georgia wasn’t doing enough to seal the border and prevent militants from using Pankisi as a refuge from Russian forces.

Pankisi residents have called for tightening the border and for more economic development in Pankisi, where many of the region’s villages live in poverty. The lack of jobs or other alternatives make it easier for recruiters to target young men, residents said.

Georgian authorities said they are working to identify the recruiters.

“I promise that anyone who promotes and incites young people and children to travel to Syria and take part in the fighting will be punished,” Georgian Interior Minister Vakhtang Gomelauri told reporters Monday.

Opposition parties, meanwhile, called for developing a “comprehensive approach” to the Pankisi’s problems.

Leaders from former President Mikheil Saakashvili’s United National Movement have warned that if the government failed to stem radicalism in Pankisi, Russia would use it as “the basis for legitimizing any destructive actions Moscow seeks to carry out against Georgia.”

Georgy Mchedlishvili, a professor at the University of Georgia in Tbilisi, said Pankisi’s poverty does not fully explain why young men are joining Islamic State, given that young people from wealthy Western European countries have also done the same.

He said Pankisi youth who grew up during the 1990s, when the Georgian state was weak economically and politically, have been easily influenced by extremist ideology.

“The inhabitants of the Pankisi Gorge should be intensively integrated into Georgian society through the media and education,” he said. “It should be made plain to them how unacceptable and hateful the ideology inherent in [Islamic State] is, how unacceptable from the point of view of Islam itself.”