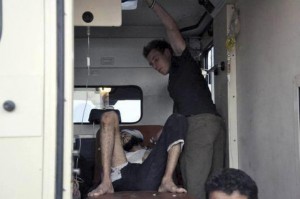 A Chechen militant fighting alongside the Islamic State (IS) group in Syria has issued a call on social media for men and women with a medical education to join a “medical battalion” in the extremist group.

Adam al-Almany, an ethnic Chechen whose nom de guerre suggests he is from Germany, put out the announcement via the Russian social-networking site VKontakte on April 23.

“Brothers and sisters who are relocating [to Syria] with a medical education, please get in touch with me, the medical brigade is making a collection of various specialists in various areas,” Almany wrote.

According to Almany, the work on offer is “at a state level” and medics joining IS’s medical battalion would “work only with muhajireen [foreign fighters].”

IS medics would enjoy a wide range of responsibilities, Almany said, “ranging from first aid on the battlefield, through [treating] the families of foreign fighters.”

If these benefits were not enough to attract medics to move to Syria and join IS, Almany offered this additional incentive — duty to the “caliphate,” the name given by IS to the lands under its control.

“We must do what we can and bring maximum benefit to the caliphate,” Almany explained.

While one person who commented on Almany’s VKontakte post warned that “physicians are not allowed on the battlefield,” another commenter replied that medics were “also people who want martyrdom on the path of God.”

“Everyone must strike toward [martyrdom], even if he is a medic. And in this case, specialists are not allowed to go to battle. Their knowledge is needed on the home front,” the commenter, Abdulhalim Arslanov, added.

Almany’s call for medics to join IS is not the first time that the extremist group has attempted to recruit doctors and other medical professionals.

While some analysts argue that IS primarily targets young people who feel “left out” of society, the militant group has also had success in recruiting professionals.

Last month, a group of British, American, and Canadian medical students and medical-school graduates were found to have traveled to Syria to work in hospitals controlled by IS.

The group included seven British, one Canadian, one American, and two Sudanese students, who are believed to have traveled through Turkey to enter Syria.

The Canadian member of the group is thought to be Ismail Hamdoun, a Toronto man who was thought to have reached Tel Abyad in northern Syria.

IS militants reportedly targeted the students via social media and used Koran verses to convince them that they had an “Islamic duty” to treat injured Muslims, Business Insider reported. The students were asked to fly to Turkey and then to Iraq or Syria to start working at IS field hospitals, where they would treat wounded fighters, according to Israel’s Channel 2.

A close family member of one medical student told Channel 2 that the IS recruiters tried to “develop a personal connection” with the students.

“They give them all kinds of verses from the Koran to drill into them the belief that they are doing the right thing and a great deed, and [say] that they are not required for fighting,” the family member was quoted as saying.

IS has also claimed to have established its own medical school in its de facto capital in the Syrian city of Raqqa, local activists said in January.

The activists said that the militant group had put billboards up around Raqqa advertising the opening of a medical school and inviting applications from high school graduates aged 18-30.