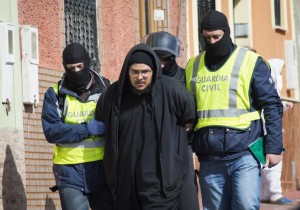 When Elton Simpson, a 30-year-old American converted Muslim from Phoenix, joined in an attack on a Garland, Texas, drawing contest for cartoons of the Prophet Muhammad this week, it drove home what terror experts have been signaling for some time. The Islamic State group’s recruitment campaign in Western countries is attracting converts who intelligence officials and experts say are the most fanatical adherents to radical Islam.

As many as one in six Europeans joining the caliphate are converts to Islam from non-Muslim faiths, including Christianity, the Washington Post reports. Others are coming from non-religious backgrounds.

In France, for example, about one in four recruits leaving home to join the Islamic State group were Muslim converts, a ratio that is significantly higher than other European countries, according to intelligence officials and terrorism experts.

Savvy outreach on social media and recruitment drives have allowed ISIS to actively woo the converts. A number of female converts joining the Islamic State go on to use Twitter, Facebook and Instagram to encourage others to join them.

Concern over ISIS recruitment in the West has largely focused on Europe’s well-established Muslim communities. In all, ISIS has won over more than 4,000 young and socially-isolated European Muslims who have left their families to join militants fighting in Syria and Iraq. Intelligence officials say these new arrivals are among the most dangerous and the most valuable because they have Western passports.

Betsy — a name used to identify the woman in the Washington Post story by her family to conceal her identity — joined ISiS after converting to Islam and becoming estranged from her family in Holland last year. Her mother and father said it started with her dressing in full Muslim robes. The 21-year-old had been a redheaded, tattooed singer with a hip-hop dream of becoming a Dutch Eminem.

By January, she was defending homegrown terrorists, and a feud with her father over her radicalization prompted her to leave. Betsy turned up days later in Syria, where she would marry an ISIS fighter, her family and Dutch officials said. “I don’t blame Islam,” Betsy’s mother, who spoke on the condition of anonymity, told the Post. “I blame the people who made her believe in a radical way of life.”