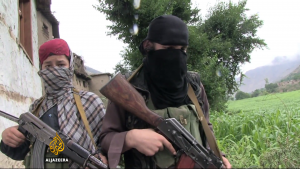 A report published by Al Jazeera states that Islamic State in Iraq and the Levant (ISIL) is recruiting and brainwashing Afghan children to become the group’s fighters and suicide bombers.

Al Jazeera has visited two bases of ISIL in eastern Kunar province of Afghanistan and talked to ISIL militants including child soldiers who have said they are ready to become suicide bombers.

Two instructors have been briefly filmed in the report during training child soldiers. One instructor is seen giving a pistol to a child of about 9-10 years in front of a line of children and tells him “hold it like this…little bit down”.

After him, another instructor appears in the video to show children how to use a Kalashnikov. “Grab the Kalashnikov in this hand,” he tells children who pay close attention to him.

The same man with long hair is seen in another place training children on grenade and firing the weapon. “This is a hand grenade…pull the trigger,” he says while a group of children sitting and watching the two being briefed.

Two other children between 13 and 14 years of age are shown in the video report with Kalashnikovs in their hands who say they are trained by foreigners. They have said that they do not fear giving up their lives and ready to become suicide bombers.

Although, militants in the report are not so many in numbers but IS-Khorasan has told Al Jazeera that many, including Europeans and Arabs, are in hiding as they wished not to talk.