You are here: Home / MidEastGulf / Islamic State ramps up violence as it prepares to pull out of Syria 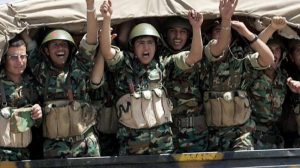 Syria’s official news agency says the government is deploying ground troops preparing to launch an attack against ISIS forces in Suwayda Province in the southeastern portion of the country, like reported by foxnews.com.

According to local media reports, ISIS has been eradicated from most parts of southern Syria and is operating from a small sliver of territory. Earlier this week, the Syrian military launched air strikes targeting remaining ISIS forces.

Last month, ISIS in what appears to be an act of desperation, killed more than 200 civilians and abducted more than two dozen mostly women and children from Suwayda. The attack is considered the deadliest in the predominantly government held province. Most of the victims are Druze, a minority group of about 700,000.

It is presumed the terror group wants to exchange their captives for captured ISIS fighters and for free passage to another part of Syria, but so far no demands have been made public. Syria ally Russia is reportedly involved in negotiations to free the hostages. Last week, ISIS beheaded a 19-year-old that the group had kidnapped.

In another development, the U.S.-led coalition in the last few days conducted 15 strikes targeting ISIS forces near the Syrian border with Iraq.