The threats were made during a discussion program on ‘Voice of the Caliphate,’ an elusive radio station operated by IS. 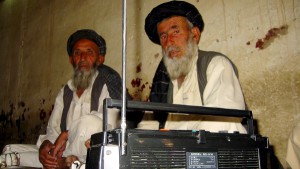 The Afghan reporters recognised the voice threatening them with death on the Islamic State group’s local radio station. It was a former colleague, who knows their names and where they work.

The threats were made during a discussion program on “Voice of the Caliphate,” an elusive radio station operated by one of the extremist group’s newest affiliates. The so-called Khorasan Province has battled Afghan forces and the Taliban alike, carving out an enclave in Nangarhar, a rugged eastern province bordering Pakistan.

It has adopted the media strategy of its mother organization in Syria and Iraq, including the production of grisly, professionally made videos showing battles and the killing of captives. But in impoverished Afghanistan, where few have access to the Internet, radio could prove more effective at recruiting fighters and silencing critics.

The group is actively targeting other media outlets to prevent them from competing with its chilling broadcasts. Militants bombed a building housing two radio stations in the provincial capital, Jalalabad, in October, and attacked the local offices of the independent Pajhwok news agency and Voice of America in July.

The menacing broadcast in mid-December, in which a former local radio broadcaster called on reporters to either join IS or risk being hunted down and killed, could be heard across Jalalabad.

“It is a great concern for us because he knows all the journalists who are working locally,” said Shir Sha Hamdard, chairman of the Journalists’ Union of Eastern Afghanistan.

“He also knows that as journalists we do not take sides and that our only weapon is the pen. We’ve tried to talk to representatives of IS to make sure they know this but we haven’t been successful,” he said. He and other Jalalabad-based reporters asked that The Associated Press not name the IS broadcaster for their own safety.

IS radio can be heard across Nangarhar on an FM frequency for 90 minutes a day in both the Pashto and Dari languages. Programs include news, interviews, vitriol against the Afghan government and the Taliban, recruitment propaganda, and devotional music in multiple languages.

The message is clear: the Afghan government is a doomed “puppet regime” of the Americans. The Taliban are a spent force hijacked by Pakistan. The caliphate is coming.

“Soon our black flag will be flying over the (presidential) palace in Kabul,” an announcer crowed in a recent broadcast.

The IS affiliate “is against everything – free media, civil society, education, all of which they say are secular, un-Islamic,” said Haroon Nasir, a civil society activist in Nangarhar. He said the message likely resonates among young men in impoverished rural areas, where after nearly 15 years of war many have soured on both the U.S.-backed government and the Taliban.

In those areas – which make up most of Afghanistan – Internet access is spotty at best, and computers and smartphones are a luxury. Just 10 percent of Afghanistan’s 30 million people have access to the Internet.

But nearly everyone has a radio.

A 2014 study by Altai Consulting found that 175 radio and 75 television stations had been set up since the 2001 US-led invasion that toppled the Taliban – which had one radio network and banned television. Wind-up radios that operate without electricity or even batteries have been widely distributed since then.

IS militants are believed to use mobile broadcasting units and cross back and forth along the porous border with Pakistan, making them difficult to track. The National Directorate of Security, the Afghan intelligence agency, did not respond to requests for comment.

Hazrat Hussain Mashriqiwal, the spokesman for the Nangarhar police chief, said “Voice of the Caliphate” broadcasts had been banned and were rarely picked up, especially in Jalalabad.

But residents tell a different story. Jalalabad shopkeeper Janat Khan said IS radio is popular chiefly due to its novelty. “Most people are listening to them because they want to know about Daesh and its strategy,” he said, referring to the extremist group by its Arabic acronym. “The preachers are strong, their message is clear – they talk against the Taliban and against (President Ashraf) Ghani’s government.”

Although IS and the Taliban both want to impose a harsh version of Islamic rule, they are bitterly divided over leadership and strategy, with the Taliban narrowly focused on Afghanistan and IS bent on establishing a worldwide caliphate.

The U.S. State Department recently added the IS Afghan affiliate to its list of foreign terrorist organizations. It said the group emerged in January 2015 and is mainly made up of disenchanted former Taliban fighters.

Over the last six months the group has taken over four Nangarhar districts, where it has imposed the same violent interpretation of Islamic law championed by the IS group in Syria and Iraq, including the public execution of alleged informers and other enemies. In August, students at Nangarhar University staged a pro-IS demonstration. Security forces swooped in to make arrests and have since cracked down on campus activism nationwide.

As the group has expanded its reach, its media strategy has grown more sophisticated and more brutal.

“They have not only made every attempt to promote themselves through all mediums from mainstream media to social media, but they have also resorted to coercing tactics to force local media to publish their news and follow their agenda,” said Najib Sharifi, director of the Afghan Journalists’ Safety Committee.

“In areas where the government cannot provide sufficient security, media might resort to compromising their editorial independence out of fear – something that could make media turn into the propaganda machinery of Daesh.”