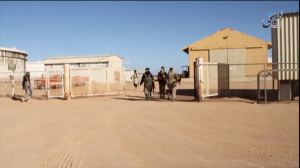 The Islamic State’s Libyan “province” has released photos from yesterday’s raid on an oil facility in Al Sidr, a port town on the Mediterranean coast.

Some of the photos (seen below) show the jihadists inside an oil installation, where they purportedly took control of storage tanks. It is not known whether the tanks are full or empty. Several images depict the jihadists firing rockets at unidentified “apostates.” 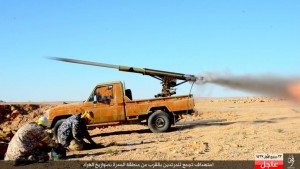 The four suicide bombers who were used at the beginning of the attack are honored in another series of images.

Separately, the ‘Amaq News Agency, which is affiliated with the Islamic State, but not an “official” propaganda outlet, has posted a short video of the operation. The video, which is just over one minute long, shows the fighters entering the oil facility. Screen shots from the production are included below.

The Islamic State has used propaganda to deceive viewers in the past, especially in Libya. In late 2014, the group claimed to have taken control of Derna, a city in eastern Libya. But that wasn’t true. Al Qaeda-affiliated jihadists remained entrenched and, in mid-2015, thwarted the “caliphate’s” attempt to take over the heart of the city.

Therefore, we do not know if the Islamic State made serious progress in Al Sidr or Ras Lanuf, the other port town the jihadists attacked yesterday. Abu Bakr al Baghdadi’s followers have made significant inroads in the city of Sirte, which is nearby. And they have taken control of two towns in the area (Bin Jawad and Nawfaliyah) as well.