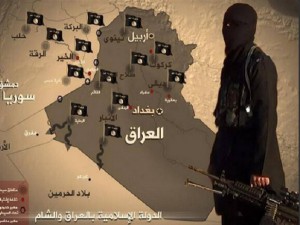 Last year, friendly Iraqi forces shot at a U.S. helicopter, all because the fighters believed that the U.S. was actually fueling and arming Islamic State militants.

A U.S. special operations commander shared that story on Wednesday to illustrate how difficult it is for the U.S. to defeat false messaging in Iraq, and how deeply entrenched those messages can become if not quickly countered.

It also explains the steadfastness with which the Pentagon has stuck with its message, despite the criticism it has received for doing so: That Ramadi is only a setback, and that overall, the Islamic State is still on the defensive.

As Joint Chiefs Chairman Gen. Martin Dempsey put it in a recent speech to national security students, “The only way that [the Islamic State] is going to be defeated is if the population rejects it, and the only way they’ll reject is if they, if their ideology, is undermined.” He called the counter-messaging campaign against the Islamic State “one of the most important efforts” in defeating the terrorist group.

In recent days, the Pentagon has been under fire for repeatedly characterizing Iraqi Security Forces retreat from Ramadi and its subsequent fall to the Islamic State as a setback. The Defense Department, meanwhile, continues to assert that, compared to its ability to maneuver last year, the Islamic State’s forces are on the defensive.

Anything less would concede a wide swath of strategic messaging to the terrorist group, despite the criticism it opens the Pentagon and policy makers to.

“In America, hypocrisy is the cardinal sin. It’s the most effective way to discredit somebody,” said information warfare expert James Farwell. It’s a vulnerability when countering the Islamic State, which “will say or do anything to win,” Farwell said. “Truth is not one of the criteria for their propaganda.”

In the case of the U.S. helicopter, Army Brig. Gen. Kurt Crytzer, deputy commander of U.S. Special Operations Command-Central, told an audience at the Special Operations Forces Industry Conference in Tampa, Florida, Wednesday that a rumor that the U.S. had supplied Islamic State forces was circulated and deeply held by the Iranian militias operating in Iraq, according to news reports.

“[ISIS] has actively conducted information operations over the course of this conflict,” said Maj. Curtis Kellogg, a spokesman for U.S. Central Command. “They depend on their propaganda, unconstrained by truth or accuracy, in an attempt to legitimize their extreme ideology. Countering this messaging and exposing [the Islamic State’s] true nature — a barbaric organization that employs a twisted ideology — is critical to ultimately defeating them.”

– Expose that the caliphate the Islamic State works toward can not provide adequate, food, water, medical care or governance for the territories it controls.

– Expose that, counter to Islamic State messaging that other faiths are welcome in the caliphate, it actually murders them.

To defeat the Islamic State’s messaging campaign, a counter-narrative must be built and believed that “ISIS leadership does not stand for any of the principles” they espouse in their media outreach, Farwell said.

But ultimately the Iraqi government and U.S. forces can win the information war against the Islamic State only “by also winning the war on the ground,” Farwell said. “They’ve got to win battles.”