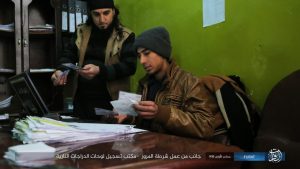 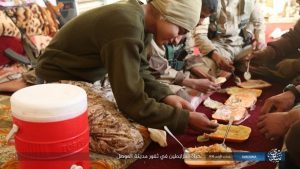 The Islamic State organization has pressed on with its propaganda effort while fending off counteroffensives in Mosul and Raqqa, its capitals in Iraq and Syria, respectively.

IS published pictures of traffic wardens from the town of Bukamal, in Syria’s Euphrates region, in an attempt to depict life as usual despite the ongoing major battles, like reported by breitbart.com .

In hitherto unveiled pictures, the “traffic wardens” are seen directing traffic and running parking lots and bus stops. In others they are seen writing down license numbers of IS traffic police cars and motorcycles.

Similar pictures of government officials were sent from the town of Al Qaim, in the Anbar region. In them, IS militants are seen developing infrastructure, running the city’s water company, arresting criminals and handing out charity money. In one picture of a waiting room in a court, people are seen being shown videos of battles waged by the organization’s militants.

The organization’s official Telegram group circulated pictures of the terror group’s militants on the outskirts of Mosul. They are seen digging trenches, setting up barricades and monitoring the movement of Iraqi troops, as well as tending to their rifles and preparing their individually packed dinners. They are also seen praying and giving medical care to the wounded.

Abu Baker Almaqdesi, a jihadist in Gaza affiliated with IS ideology, claimed to Breitbart Jerusalem that the Arab and international media misleads young Muslims by reporting IS retreats in Syria and Iraq.

“To turn young Muslims off the Islamic State, the nonbelieving media in the self-proclaimed Muslim and Crusader countries highlight what they call the gains of the infidels, such as in Elbab, and a tactical retreat of our brothers in Mosul,” he said.