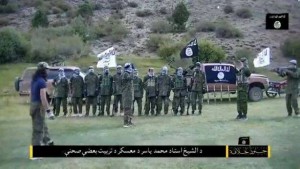 The training camp has been named after the Taliban commander – Ustad Yasir who was killed in 2012 in an internecine dispute.

A set of photographs which purportedly shows the group conducting training has been published online by a Pakistani reporter Saleem Mehsud.

According to the Long War Journal newspaper quoting Mehsud the images were email to him by the group and were published online on 18th April.

The images shows a group of 14 militants along with pickup truck with a heavy machine gun mounted on the back moving through a creek.

The authenticity of the phonographs has not been ascertained as the Afghan officials have not commented regarding the report and photos yet.

The Sa’ad bin Abi Waqas Front has been reportedly running the training camp led by Sa’ad Emarati, a former commander in the Movement of the Taliban in Pakistan who defected to the Islamic State’s Khorasan Province last year along with other disaffected Taliban commanders from Afghanistan and Iraq.

The group was named after Sa’ad bin Abi Waqas, an al Qaeda emir in Kunar province who was killed by the US military in an airstrike on April 14, 2011.

The latest report suggesting establishment of training camp by ISIS in Logar province comes as President Mohammad Ashraf Ghani acknowledged for the first time last month that the terrorist group was gaining influence in the country.

Speaking during a press briefing ahead of his visit to United States, President Ghani said “Daesh’s characteristic is that it is man-eating. It swallows its competitors.”

“Here, it is not physical presence of people from Syria or Iraq. It is the network effect,” President Ghani added.

This comes as a video emerged earlier this month which purportedly shows militants loyal to the terror group operating in a valley not far to the south of Kabul.

The video published by CNN shows a group of masked gunmen who are covering their faces like the ones in Iraq and Syria while holding flag of ISIS in their hands.

The militants are saying that they are recruiting fighters for ISIS and are in constant contact with ISIS commanders in Iraq and Syria.

“He called us, saying: ‘the IS people have come to Afghanistan — let’s join them.’ Then we joined them and pledged allegiance to them,” one of the militants appearing in the video says.