You are here: Home / Analysis / Islamic State praised the use of trucks to carry out attacks 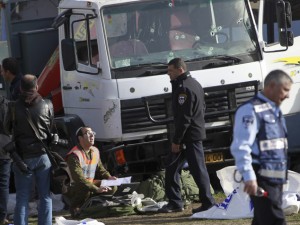 After a lull of several weeks, four soldiers were killed and 17 others wounded, when a truck rammed into a group on an educational trip to Jerusalem’s Armon Hanatziv promenade, a location with a stunning panorama of the capital.

Since a wave of violence broke out in September 2015, Palestinian attackers have killed more than 40 Israelis and two Americans.

At least 230 Palestinians have been killed by Israeli fire, the majority while carrying out attacks. The rest died in clashes with IDF soldiers.

Palestinians have used cars, trucks, buses and even tractors to carry out attacks against Israelis in the past, but with trucks now routinely used by groups such as ISIS and al-Qaida for deadly terrorist attacks, this attack in Jerusalem becomes reminiscent of the deadly ISIS-inspired ones that hit Europe this year.

In July, Tunisian-born French resident Mohamed Lahouaiej-Bouhlel drove a 19-ton truck down Nice’s Promenade des Anglais into a crowd of people who had gathered for a Bastille Day firework display, killing 86 people and injuring hundreds of others. In December, 12 people were killed and at least 56 others injured when Tunisian- born Anis Amri drove a truck into a Christmas market in Berlin’s Breitscheidplatz, one of Berlin’s busiest shopping areas.

At the scene of the attack, Prime Minister Benjamin Netanyahu said the attacker was “by all indications” an Islamic State supporter, and Defense Minister Avigdor Liberman called it an “attack inspired by ISIS,” adding, “We saw it in France, we saw it in Berlin and unfortunately we saw it today in Jerusalem.”

According to Orit Perlov, social media analyst and research fellow at the Institute for National Security Studies in Tel Aviv, Palestinian support for ISIS is declining. “The peak was in 2014-2015 when they had 14% support, it declined to 8% in 2016,” she told The Jerusalem Post that “There are a lot of ISIS sympathizers, but it does not mean that there is a direct connection to the group. We need to remember that ISIS is like the McDonald’s of [terrorism], it’s the brand that you want to be connected to when you carry out a terror attack today.”

Perlov said: “It’s a good brand to be connected to today,” and added that the popularity of Hamas is on the decline. “Today it’s not good to be a Hamas sympathizer if you want to carry out a terror attack.

Today, when Hamas is no longer popular, you need to be a part of something else.”

While Hamas did not claim responsibility for the attack, the group called it “heroic” and posted on Twitter that “the truck operation in Jerusalem affirms that all attempts to encircle the [Palestinian] intifada will fail.”

Hamas spokesman Abdul-Latif Qanou encouraged other Palestinians to do the same to “escalate the resistance” as that proves that the wave of violence has not ended. The resistance Qanou said, “may be quiet, it may linger, but it will never end.”

However, Perlov noted that “every terror organization would want to claim responsibility” for this type of attack to stay relevant.

And while it is hard to track down potential lone wolves, ISIS and al-Qaida have made it easy for their supporters to carry out attacks.

In the third edition of Islamic State’s English-language Rumiyah magazine, the group praised the use of trucks to carry out attacks because while “being an essential part of modern life, very few actually comprehend the deadly and destructive capability of the motor vehicle and its capacity of reaping large numbers of casualties if used in a premeditated manner.”

In the same article, the group urged ISIS members and sympathizers anywhere in the world to use vehicles – stealing them if needed – to attack outdoor targets, specifying a “load-bearing truck, large in size, with reasonably fast speed or rate of acceleration.”

The group urged supporters to use a truck that is “heavy in weight” and “doubled-wheeled” to “assure the destruction of whatever it hits and give victims less of a chance to escape. The method of such an attack is that a vehicle is plunged at a high speed into a large congregation of kuffar [non-believer], smashing their bodies with the vehicle’s strong outer frame, while advancing forward – crushing their heads, torsos, and limbs under the vehicle’s wheels and chassis – and leaving behind a trail of carnage.”

According to Perlov, Israel will likely see more attacks carried out by IS sympathizers, at least “once or twice a year.

In the end, there is no such thing as 100% [prevention rate]. No matter how many blockades you put, or how many raids are carried out, one will succeed in carrying out his mission.