U.S. military has seen video of militants ordering young kids to stand outside of several known weapons factories around Raqqa 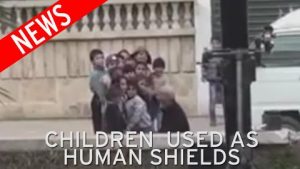 The Islamic State has begun posting Syrian children outside of car bomb factories as part of an attempt to stave off U.S.-led coalition airstrikes, according to the Pentagon and like reported by freebeacon.com.

Col. Ryan Dillon, spokesman for the anti-ISIS campaign, told that the U.S. military has seen video of militants ordering young children to stand outside of several known factories around Raqqa that are used to manufacture vehicle-borne improvised explosive devices.

Dillon said while this has prevented coalition forces from directly striking the factories, American-led troops are able to take out many of the bomb-ridden vehicles before they reach crowds of civilians or Syrian Democratic Forces.

“We know of a particular factory where anything that drives out of there we’ll strike as soon as it’s clear and free from places where we think they’re going to have civilian casualties,” he said over the phone from Baghdad.

“We’ve also tried to crater main roads throughout the city so that these vehicle-born IEDs can’t just spring down a road at 50 miles-per-hour—they have to go around potholes and other things strewn across the streets.”

Dillon said a key reason the United States issued arms and antitank weapons to both Arab and Kurdish factions of the SDF is to enable local forces facing an eminent threat to blow-up vehicle-borne IEDs when American troops are unable attack in time.

Since coalition operations to retake Raqqa began in June, ISIS has taken advantage of the closely spaced buildings and tight streets of the city to plant large IEDs in an attempt to slow SDF advances. More than 80 percent of the ISIS assaults against SDF forces over the past two months have been carried out using IEDs, according to Dillon.

“We have seen a higher increase in the use of IEDs in Raqqa compared to what we saw in Mosul,” he said, referring to ISIS’s former de facto capitol in Iraq. He said there’s also been an uptick in vehicles rigged with explosives parked along busy streets.

The SDF currently controls 45 percent of Raqqa. Military officials said while the offensive gained significant ground early on, it has since slowed down. Dillon rejected the characterization of a stalemate and said SDF troop were continuing to progress daily.