You are here: Home / MidEastGulf / Islamic State poised for more attacks in Syria in 2022 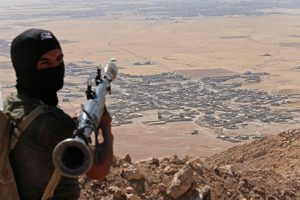 Experts say that militants linked to the Islamic State terror group appear to be planning more deadly attacks in Syria this year, like reported by voanews.com.

The assessment comes after an increase in IS activities in recent weeks, including two strikes claimed by the group against its foes in the war-torn country’s eastern and central regions.

Late Sunday, five Syrian government soldiers were killed, and 20 others wounded when IS militants attacked their military bus on a highway in Syria’s desert region, the state-run SANA news agency reported on Monday.

IS, also known as ISIS or Daesh, reportedly used missile artillery in the strike that targeted the Syrian military convoy.

On the same day, the extremist group claimed responsibility for an attack on a checkpoint controlled by the U.S.-backed Syrian Democratic Forces in the eastern province of Deir al-Zour.

An SDF official confirmed the attack to local media but said there were no casualties on their side.

“This could be a slow buildup” for the militant group in the coming months, Colin Clarke, senior research fellow at the New York-based Soufan Center, told VOA.

IS “is a group that is highly opportunistic. They’re going to look to exploit the missteps and mistakes of other governments in the region,” he said.

Despite losing nearly all the land they once controlled, IS militants continue to launch massive attacks against their opponents in Syria and Iraq.

According to the Syrian Observatory for Human Rights, at least 600 people were killed in dozens of IS attacks last year in Syria.

Rami Abdulrahman, director of the Syrian Observatory, told VOA that IS will likely remain a major security challenge for the opposing Syrian forces in the new year.

“Last year, we witnessed a steady rise in attacks claimed by Daesh whether in areas controlled by the [Syrian] regime or the SDF. So naturally we should expect more such sophisticated attacks in the new year,” he said.

In its annual report released on Monday, the SDF said it carried out 115 security operations against IS cells in northeast Syria in 2021. Those raids were conducted either independently or in coordination with the U.S.-led coalition against IS, the SDF reported.

According to the Kurdish-led military alliance, last year’s operations resulted in the dismantling of more than 90 terror cells and the arrest of around 800 IS suspects.

“The Islamic State has a lot of enemies, the SDF, the Syrian regime; none of that has changed,” he said. “Everybody is still against ISIS, which the group uses in its propaganda to rally the troops and keep morale up.”

Clarke added that the group has some challenges to encounter, including “generating momentum over a sustained period of time.”

There were “two major attacks in Syria, but can they string together? Can they keep it up for a week or several weeks? Is that something that’s part of a strategy?” he asked.