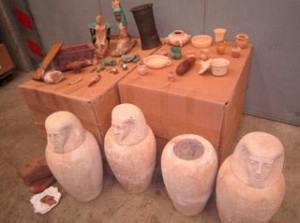 Islamic State (IS) group militants make US$100 million each year by selling antiquities they have plundered from archaeological sites and museums across Iraq and Syria, Iraq’s UN ambassador Mohammed Alhakim told Middle East Eye on Monday.

Members of the United Nations discussed issues like the destruction of heritage as a war crime this week.

“Interpol gave us a number of $100 million a year – it is a source of income, a revenue, for IS. So that is a sizeable number,” Alhakim told MEE after a UN Security Council meeting on halting online auctions and other black market sales of plundered heritage.

“It’s the first time for a meeting like this at this level on culture and heritage. It went beyond technical issues and we discussed issues like the destruction of heritage as a war crime,” he said. “This is one issue on which all nations agree.”

IS controls swathes of Sunni-majority areas on either side of the Iraq-Syria border and have plundered sites and collections for relics that are then couriered for illicit overseas sales to replenish its war chest.

According to Alhakim, Iraq calculates that it has lost 2,700 items – large and small – that have been logged in a database run by Interpol, a global police cooperation network. Syria has registered 1,300 items as lost, he added.

He spoke with MEE after a closed-door UN meeting that included Irina Bokova, head of the UN’s cultural wing, Unesco and Jürgen Stock, secretary-general of Interpol. It followed a spate of IS heritage lootings and destructions in northern Iraq and northwest Syria.

IS, which rules a self-declared caliphate in parts of Iraq and Syria, promotes a fiercely purist interpretation of Sunni Islam and rejects religious shrines of any sort and condemns Iraq’s majority Shiite Muslims as heretics.

“This fight is an existential fight for all of us. It’s about the core and the heart of our DNA as human beings,” France’s UN envoy, Francois Delattre, told reporters.

“The discussion was about the exchange of best practices and the best way to roll up our sleeves and fight as best we can against the scourge of the eradication of culture around the world, especially in Syria and Iraq.”