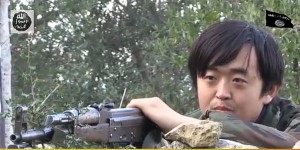 Hong Kong may be ideal for ISIS recruitment and expansion, according to a Chinese counterterrorism expert in a report by abna24.com .

Hong Kong isn’t the United States, France or the United Kingdom, each with hundreds of citizens now in league with extremist ISIS fighters.

Hong Kong, arguably, isn’t even China, which state-run tabloid Global Times reported in December had 300 Chinese nationals fighting in Iraq and Syria, mostly from the traditionally Muslim province of Xinjiang.

Hong Kong, bluntly said, has no citizens worth having.

Sure, it has disillusioned teenagers trying to find purpose—a frequent ISIS recruitment target.

But it’s hard to see kids like Scholarism founder Joshua Wong—defiant as they come but by his own admission not exactly physically intimidating—taking active part in bombings, executions, kidnappings and beheadings.

Hong Kong also has legions with low self-esteem; it is perennially near the bottom of the 10 lowest-ranked nations, just above Japan, in international surveys on confidence and dignity.

ISIS recruiters like that dubious quality in draftees because it makes them easy prey to near-irresistible promises of camaraderie, good morale and sense of belonging—inspiration enough for many foreign fighters to burn their passports.

Then there are those Indonesian domestic helpers who ISIS has already been reportedly recruiting.

Get real. No maid in Hong Kong is going to pledge allegiance to ISIS leader Abu Bakr al-Baghdadi.

Likewise, no maid in Hong Kong is going to move to the dust bowls that are Iraq, Syria or northwestern China’s Xinjiang Uyghur autonomous region to carry out acts of terrorism.

The only move she’s making is against her bitchy, abusive employer.

Nonetheless, Want China Times reports that Yang Nu, an anti-terrorism professor at Lanzhou University, says Hong Kong may be targeted by the [so-called] Islamic State because it is a region with lots of Muslims.

Hong Kong is also a convenient destination to reach from Indonesia, the Philippines and Malaysia, all countries with significant Muslim populations and threats of infiltration by ISIS, he added.

ISIS, for reference, controls territory in Syria, Iraq, Libya and Nigeria approximately 245 times the size of Hong Kong (about the size of Oregon).

Whether that’s an accurate assessment or not, over 60 countries are directly or indirectly waging war against ISIS.

Last month, seven Chinese nationals were detained in Turkey as they attempted to enter Syria, reported The Week, highlighting China’s growing problem with its Muslim minority.

Chinese officials are worried radicalized Uighurs traveling abroad to train and fight for ISIS or another rebel militant group will return with skills that could bolster China’s domestic insurgency.

The prospect of having to face returned fighters with military experience and training in laying improvised explosive device and suicide attacks is deeply concerning to Beijing, said The Week.

Want China Times reports that The Oriental Press Group claims Islamic State may have already infiltrated universities in Beijing, Xi’an and Guangzhou, citing reports that the terrorist organization has been targeting ethnic Muslim Uyghur students in these cities.

After being radicalized, the students would allegedly be sent off to Southeast Asian countries such as Indonesia, Malaysia and Thailand before being transferred to Syria and Iraq to fight for the self-declared caliphate.