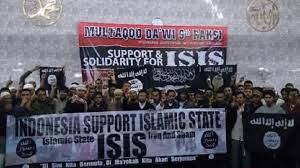 Despite some of the recent setbacks, the Islamic State continues to remain the deadliest militant outfit in the world. The initial inertia on the part of world superpowers and probably their underestimation of the Islamic State’s potential for expansion helped in its dramatic growth.

The ambitious plans of the Islamic State, also referred as ISIS (Islamic State in Iraq and Syria) and ISIL (Islamic State in Iraq and the Levant), to establish its new terror Islamic State Army in Afghanistan and Pakistan were indicated in an apparent Islamic State’s recruitment document found in Pakistan in the last week of July 2015. According to media reports, the 32-page document in Urdu obtained by American Media Institute (AMI) revealed targeting of American diplomats and Pakistani officials and also made a reference to triggering of war in India. After examining the document, three US Intelligence officials opined that the writing style, religious words and language used to describe leaders match other documents earlier recovered from the Islamic State.

In the context of mounting pressure on Islamic State targets in the so-called caliphate (border area between Turkey, Syria and Iraq) by the US-led coalition and future plans of Islamic State to establish a caliphate in the Northern area bordering Pakistan, Afghanistan, Indian and China, the above stated report remains relevant, necessitating a coordinated strategy from Afghanistan, Pakistan, India and China, hereafter referred as APIC countries.

Despite some of the recent setbacks, the Islamic State continues to remain the deadliest militant outfit in the world. The initial inertia on the part of world superpowers and probably their underestimation of the Islamic State’s potential for expansion helped in its dramatic growth. From what has started as an outfit with a few hundreds of jihadists, Islamic State quickly multiplied into 30,000-strong force today. Islamic State established their headquarters in the triangular border area between Syria, Iraq and Turkey. Factors like difficult terrain, absence of security forces and lack of effective civil administration in the area facilitated Islamic State in consolidating their base and launch operations in the adjoining countries.

When Islamic State was in its embryonic stage in 2011, Arab countries in the region, including Turkey, either did not take cognisance of Islamic State’s presence or passively encouraged it with the hope that Islamic State along with Free Syrian Army would be able bring down the Al Assad regime in Syria. Same was the calculation on the part of world superpowers till the world community mounted pressure in 2014 for action on Islamic State on account of its brutal killings, beheadings, public hangings, stoning to death and burning people alive etc. But it was a late realisation on the part of world superpowers as by that time Islamic State could consolidate their position in the caliphate stretching over an area of 423 miles with a well-organised fighting force which could take on established national armies in the region.

The threat of Islamic State efforts to establish their future base in the Northern border area (including north of PoK) between Afghanistan, Pakistan, India and China remains very high. After months of persuasion, Turkey finally joined the coalition of forces on their fight against Islamic State. Due to ongoing pressure, particularly after Turkey joining the US-led coalition, Islamic State has been forced to seek safe havens elsewhere and the above noted area seems to have been considered as an ideal place by the Islamic State to establish their operational base and launch operations in the adjoining countries. Once Islamic State consolidates its base, the Northern border area will become a “black triangle” and significantly impact national security interests of adjoining countries besides threatening regional stability. There is no denying to the fact that Pakistan would continue to insist that relations, either political or economic, can be normalised only after the Kashmir dispute is resolved.

However, it has to be noted that everything is possible in the international diplomacy, particularly when they have to fight a common enemy. In international diplomacy, “there are no permanent friends or permanent enemies and only permanent interests.” In the present context of fight against terrorism, the bordering countries need to keep aside their long-pending issues like border disputes etc for a while and focus on regional coordination and strategy to deny Islamic State in establishing its base in the border area in the interest of their own national securities. The APIC (Afghanistan, Pakistan, India and China) countries need to realise the rapidly raising influence of Islamic State in their borders. Afghanistan, which emerged out of a prolonged war on terrorism can ill afford to allow itself slipping into another terrorist turmoil. Some of the Taliban cadres have already proclaimed their allegiance to Islamic State and the white flags of Taliban have been replaced by black flags of Islamic State in provinces like Helmund.

Similarly, the Islamic State’s black flags also cropped up from time to time in Jammu and Kashmir state of India. With the second-largest Shia population in the world, India cannot allow Islamic State to become a next-door neighbour. China is particularly concerned about the aspect of Uyghur Islamic militants receiving support from hardcore jihadists like Islamic State as any such linkage would adversely affect their national security interests.

The situation is no better in Pakistan. The apparent Lashkar-e-Jhangvi’s invitation to Islamic State into Pakistan lead to a spike in anti-Shia violence in their country. With almost 25% of Shia population and some of the militant outfits like Tehrik-e-Taliban already posing serious internal security problems, Pakistan cannot afford to allow consolidation of Islamic State in the “black triangle” area. In this way, security of APIC countries continue to be effected by the Islamic State’s expansion and likely to create chaotic conditions in the region in similar lines that of West Asia. Hence, APIC countries have to put up a coordinated effort against their common enemy (Islamic State )and deny latter’s consolidation in the “black triangle” area.

India can play a lead role in mobilising APIC countries for regional cooperation on this specific issue and deny Islamic State in establishing their operational base or else it will be like repeating the same mistake that world superpowers initially committed in allowing Islamic State in consolidating their present day caliphate in Iraq-Turkey-Syria border. Once Islamic State establishes its base in the “black triangle” area, the much feared marriage of Jihadi Islam with nuclear weapons is likely to gain momentum.