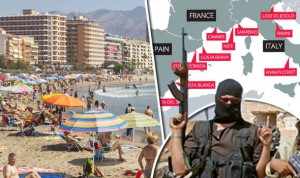 The Islamic State is planning a Tunisia-style massacre of tourists involving bombs placed under sunbeds, Italian security forces have claimed.

German newspaper Bild reports that the Islamic State of Iraq and the Levant (Isil) hoped to send jihadists to tourist resorts posing as refreshment vendors.

The Italian equivalent of MI6 had reportedly been warned of the attacks by a well-placed Isil source in Africa, and informed their German and French counterparts immediately.

Automatic rifles would also be used to gun down tourists, Bild reported, while bombs would be carefully buried in the sand near sunbeds to avoid detection.

It is understood that the south of France and the Costa del Sol were the main targets.

“This could be a new kind of terrorism,” the newspaper quoted a senior German security source as saying, “holiday beaches cannot be protected.”

According to German media reports, the threat comes from the Isil-allied group Boko Haram, a jihadist group notorious for its kidnapping of 276 schoolgirls in Chibok.

Last year 38 people, including 30 Britons, were gunned down when terrorists opened fire on a beach resort in Tunisia.